Skip to main content
Abraham Lincoln: Defender of the Union
By: Mark Shulman
Stock No: WW4125449 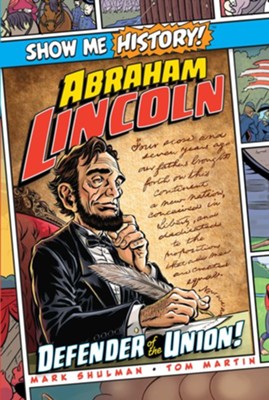 Abraham Lincoln: Defender of the Union

Considered by many historians to be the greatest American president, Abraham Lincoln led the Union at the greatest turning point in the nation’s history. Abraham Lincoln: Defender of the Union! tells the story of one of America’s most admired figures in graphic novel format. From his childhood on a farm in Kentucky to the battlefields of the Civil War, Abraham Lincoln served the United States with resolve, intelligence, and courage unlike that of any other president. Readers of all ages will be entertained and educated by the full-color illustrations and historically accurate narrative of this graphical biography.

▼▲
Mark Shulman has written more than 150 books for kids of all ages, including illustrated stories for Marvel Comics, Scholastic, Chronicle Books, Simon & Schuster, and more. Their subjects include The Incredible Hulk, Madagascar, Shamu the orca, The Amazing World of Gumball, and others. Mark started reading comics when they cost just 15 cents and hasn't stopped. He's still got Silver Surfer #1 in very fine condition, and he's not letting it go. Tom Martin graduated from the Joe Kubert School of Cartoon and Graphic Art, where he studied cartooning and sequential storytelling. When not doing graphic design and private commissions, he worked for Dark Horse, Busstrykk, Hasbro, AT&T, and others. For more of his work, follow him on Instagram (@undeadwizardart) and Twitter (@Tom_Martin_Art). John Roshell is a co-founder of Comicraft, the lettering and design studio best known for pioneering the process of digitally lettering comic books. He has lettered thousands of comics for Marvel, DC, Dark Horse, Blizzard, and more; created hundreds of typefaces widely used in comics and video games; and designed loads of logos for franchises like the Avengers, Daredevil, Black Panther, and Angry Birds. He lives in Santa Barbara with his wife Starshine, two boys, and a somewhat ugly dog.

▼▲
I'm the author/artist and I want to review Abraham Lincoln: Defender of the Union.
Back