Skip to main content
SPRING CYBER EVENT STARTS NOW: And it's a really BIG deal! Up to 88% off through 5/24>
Abraham Lincoln Civil War Stories - eBook
By: Joe Wheeler
Stock No: WW36220EB 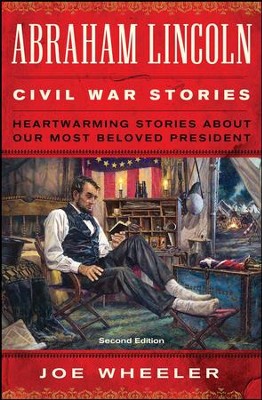 ▼▲
This historic heirloom treasury is filled with heartwarming stories about our nation’s most beloved president—Abraham Lincoln.

More books have been written about Abraham Lincoln than about any other president in United States history. And now, story archeologist Joe Wheeler has gathered—for the first time ever—the most beloved, the most deeply moving stories about Lincoln ever written. In this treasure you will dis­cover who Lincoln really was through stories that bring to life the powerful principles upon which America was founded.

This rare and beautiful heirloom collection reveals the servant heart of Presi­dent Lincoln, his dedication to the people who served him, and his homespun humor and wisdom. These are the stories that build character and inspire convic­tion in those who read and hear them. Gathered for the very purpose of being passed from generation to generation, these delightful stories will become favor­ites of adults and children alike—as parents and grandparents read them again and again to their children and grandchildren.

Collected over a lifetime from old magazines and publications—most pub­lished between the 1880s and the 1950s—these stories tell of the personal life of Lincoln, his tumultuous years during the Civil War, and the impact he had on the people who met him.

▼▲
Joe Wheeler is considered one of America’s leading story anthology creators. His bestselling “Christmas in My Heart” story anthology is the longest running Christmas story series in America. Wheeler earned a master’s in history from Pacific Union College, a master’s in English from Sacramento State University, and a PhD in English from Vanderbilt University. He lives with his wife in Conifer, Colorado.

Cover illustration: "In the Darkest Hour: Lincoln at Antietam" by Nathan Greene, © 2010. All rights reserved, used by permission. www.NathanGreene.com.

▼▲
"My friend Joe Wheeler’s new collection of stories is sure to appeal to anyone who wonders what it would have been like to encounter Abraham Lincoln in person. These compelling accounts, painstakingly gathered over many years, offer a unique perspective on Lincoln’s humble spirit in the midst of the chaotic surroundings of the Civil War."
"Thomas Lincoln was a master storyteller, a skill he taught his son. Those who knew Lincoln vividly remembered the stories he told. Joe Wheeler sifts through the many stories about America's favorite president to provide a portrait of the man through the medium he loved--stories."

▼▲
I'm the author/artist and I want to review Abraham Lincoln Civil War Stories - eBook.
Back
Back