We are OPEN and SHIPPING - click here for shipping estimates
Sync or Swim: A Fable About Workplace Communication and Coming Together in a Crisis
By: Gary Chapman, Paul White, Harold Myra 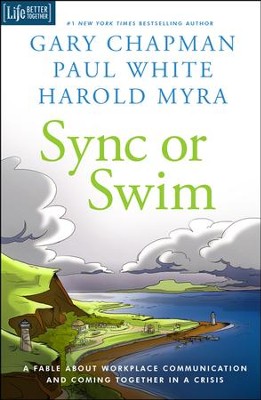 Sync or Swim: A Fable About Workplace Communication and Coming Together in a Crisis

▼▲
Sync or Swimis a refreshing, illustrated story of a sheepdog and a puffin that help us to solve a frustrating mystery: Why do morale-building programs often hurt morale…and why does communicating appreciation too often result in cynical reactions?

In Sync or Swim, you'll follow an organizational manager and the challenges he has to overcome:

It's a small tale with great wisdom, a classic insight into the ways expressing authentic appreciation can change everything-and help us survive the storms that threaten us in work and life.

▼▲
GARY CHAPMAN--author, speaker, counselor--has a passion for people and for helping them form lasting relationships. He is the #1 bestselling author of The 5 Love Languages series and director of Marriage and Family Life Consultants, Inc. Gary travels the world presenting seminars, and his radio programs air on more than 400 stations. For more information visit his website at www.5lovelanguages.com.

Paul White, PhD, is a psychologist, author, and speaker who ¿makes work relationships work." He has consulted with a wide variety of organizations, including Microsoft, the US Air Force, the Million Dollar Round Table, and Princeton University. He and Gary Chapman coauthored The 5 Languages of Appreciation in the Workplace.

HAROLD MYRA served as the CEO of Christianity Today International for 32 years. Under his leadership, the organization grew from one magazine to a communications company with a dozen magazines, copublished books, and a major Internet ministry. Myra started his journalistic career with "Youth for Christ" magazine, which under his leadership became "Campus Life" magazine. Author of five novels, numerous children's and nonfiction books, and hundreds of magazine articles, Myra has taught writing and publishing at the Wheaton College Graduate School in Illinois. He holds honorary doctorates from several colleges, including Biola University in California and Gordon College in Massachusetts. Myra has received various awards, among them the prestigious Magazine Publisher's Award and the James Deforest Murch Award from the National Association of Evangelicals. The Evangelical Press Association presented him with its highest honor, the Joseph T. Bayly Award, for his triple career as an editor, author, and publishing executive. Harold and his wife, Jeanette, are the parents of six children and grandparents of five. They reside in Wheaton, Illinois.

▼▲
"Love, love, loved it! Besides describing exactly what is transpiring in many workplaces, the characters also reflect to perfection the personality types commonly experienced. It was an easy read that flowed well. Amazing work!"-Caroline Rochon (Author / Corporate Trainer / TEDx Speaker)

▼▲
I'm the author/artist and I want to review Sync or Swim: A Fable About Workplace Communication and Coming Together in a Crisis.
Back
×
Back
×