Skip to main content
What They Don't Tell You About: William Shakespeare / Digital original - eBook
By: Anita Ganeri
Stock No: WW65647EB 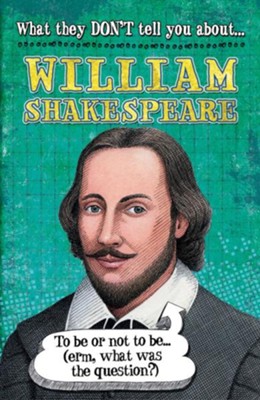 What They Don't Tell You About: William Shakespeare / Digital original - eBook

Did you know that Shakespeare couldn't spell his own surname?

Love him or hate him, everyone has heard of the world's most famous playwright. But did the Elizabethans think he was a genius or simply that he wrote great soap operas? Any book on Shakespeare will give you the boring facts THEY think you should know, but only this one will tell you what the bard and his mates were REALLY like ...

Uncover a wealth of information about Shakespeare! Find out where he was born and look at his family tree, see a map of Shakespeare's Stratford and Shakespeare's London, find out what school was like in Shakespeare's time, what London life was like and what sort of people went to the theatre. See a cross-section illustration of the Globe and discover how special effects were created and what actors wore. Read biographies of famous actors of the era such as Edward Alleyn, Richard Burbage, Richard Tarlton and William Kempe as well as biographies of contemporary writers Ben Jonson, Thomas Kyd and Christopher Marlowe. Read famous quotes and sayings and whizz your eye over a timeline of Shakespeare's plays and of his life.

This book will tell you what Shakespeare's longest or shortest play is, or even which is the most miserable or goriest? It includes plots and information about ten of Shakespeare's plays: Richard III; Romeo and Juliet; A Midsummer Night's Dream; The Merchant of Venice; Henry V; Twelfth Night; Hamlet; Othello; Macbeth and The Tempest. It highlights some of Shakespeare's funniest characters and some of those that were in love.

Finally, test your knowledge of all you've read with a fun 20-question quiz.

▼▲
Anita Ganeri read languages at Cambridge University before starting a career in children's books as Foreign Rights Manager at Walker. After then moving to Usborne Publishing as a writer and editor, she became a full-time freelance children's author.

▼▲
A lively but sound guide... a very good and inexpensive little handbook for all kinds of readers.—Carousel

▼▲
I'm the author/artist and I want to review What They Don't Tell You About: William Shakespeare / Digital original - eBook.
Back
Back