We are OPEN and SHIPPING - click here for shipping estimates
PRE-SUMMER CYBER SALE EXTENDED thru 6/1 ~ Over 2,500 items up to 90% off
I Don't Want to Talk about It: Overcoming the Secret Legacy of Male Depression
By: Terrence Real 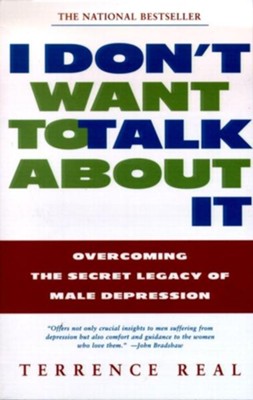 I Don't Want to Talk about It: Overcoming the Secret Legacy of Male Depression

▼▲
A revolutionary and hopeful look at depression as a silent epidemic in men that manifests as workaholism, alcoholism, rage, difficulty with intimacy, and abusive behavior by the cofounder of Harvard’s Gender Research Project.

Twenty years of experience treating men and their families has convinced psychotherapist Terrence Real that depression is a silent epidemic in men—that men hide their condition from family, friends, and themselves to avoid the stigma of depression’s “un-manliness.” Problems that we think of as typically male—difficulty with intimacy, workaholism, alcoholism, abusive behavior, and rage—are really attempts to escape depression. And these escape attempts only hurt the people men love and pass their condition on to their children.

This groundbreaking book is the “pathway out of darkness” that these men and their families seek. Real reveals how men can unearth their pain, heal themselves, restore relationships, and break the legacy of abuse. He mixes penetrating analysis with compelling tales of his patients and even his own experiences with depression as the son of a violent, depressed father and the father of two young sons.

▼▲
Terrence Real is a psychotherapist in private practice. He has taught couples and family therapy, principally at the Family Institute of Cambridge, for twenty years. He lives with his wife and two sons in Newton, Massachusetts.

▼▲
Richard Higgins The Boston Globe An important book about men and depression that is uplifting...Men will recognize the other men found here: laconic bullet-biters, 'rage-aholics,' emotional runaways, and badly fathered sons turned into disconnected dads who spill their emotional truths onto the page.
Michael Kimmel San Francisco Chronicle Book Review Extraordinary...brings to light a hidden history of male depression...A powerful book.
Pamela Warrick Los Angeles Times The most provocative in a flood of new books on depression...The only volume that speaks exclusively to and about depressed men.

▼▲
I'm the author/artist and I want to review I Don't Want to Talk about It: Overcoming the Secret Legacy of Male Depression.
Back
×