Skip to main content
OUR BIGGEST BARGAIN SALE EVER: Over 6,000 deals at never-seen-before prices ~ through 8/23. Shop now >
Good News About Injustice: A Witness of Courage in a Hurting World
By: Gary A. Haugen
Stock No: WW837100 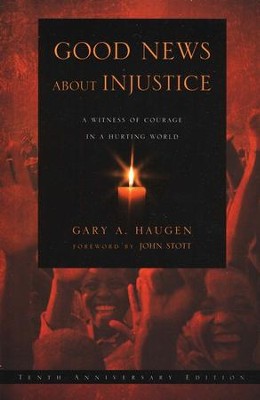 Good News About Injustice: A Witness of Courage in a Hurting World

▼▲
Gary Haugen brings us face to face with the reality of evil and arms us with the truth about injustice. After ten years on the front lines of the battle against slavery and oppression, Haugen shares the biblical foundation and practical tools to overcome the most urgent crises of our day. Updated with a new introduction and stories from the files of International Justice Mission investigators, lawyers, social workers, pastors, educators, Good News about Injustice provides concrete guidance on how you can seek justice today.

▼▲
The good news about injustice is that God is against it. God is in the business of using the unlikely to accomplish justice and mercy. In this tenth-anniversary edition of Gary Haugen's challenging and encouraging book he offers stories of courageous Christians who have stood up for justice in the face of human trafficking, forced prostitution, racial and religious persecution, and torture. This expanded edition brings up to date his work in calling for the body of Christ to act. Throughout, he provides concrete guidance on how ordinary Christians can rise up to seek justice throughout the world.

Gary A. Haugen is president and CEO of International Justice Mission (IJM), a human rights organization based in Washington, D.C. Prior to founding IJM, he worked in the civil rights division of the U.S. Department of Justice and was director of the United Nations' genocide investigation in Rwanda. Haugen is a graduate of Harvard University and received a J.D. from the University of Chicago. He is the author of Terrify No More and Just Courage.

Educating ourselves about the manifestation of injustice in the world can be painful, and as a result many of us try to avoid it. Like children who bury themselves under the covers with flashlights in fear of the dark, some of us are guilty of averting our eyes from the results of injustice by pretending the victims do not exist. However, for those who have been victims of injustice, the results are impossible to avoid.

Gary Haugen's book, Good News about Injustice, can help concerned Christians not only face injustice but also become a part of the solution. As a former worker in the civil rights division of the U.S. Department of Justice, former director of the United Nations genocide investigation in Rwanda, and current president of the International Justice Mission, Haugen draws from his vast experience. Good News about Injustice does not list every injustice in history; nor is it a theoretical text exploring God's role in evil and suffering. Haugen's book does some of both, but more importantly, he creates space for readers to imagine themselves involved in God's plan to bring justice to the oppressed.

Haugen begins his book in Rwanda after the massacre of Tutsis in April 1994. While working to confirm the testimonies of witnesses of the massacre, Haugen spent time collecting information in mass graves. He recognized the temptation to depersonalize the horror of what happened in Rwanda: "These mass graves might appear as vague, dark images of generalized evil in an unjust world, but in truth they were an intimate family portrait with a story for every face - each member of the human family having lived and died as one individual at a time" (pg. 29).

Haugen outlines what we can understand biblically about God and his relationship to injustice in his book. In a nutshell, Haugen points out that we can find hope in the fact that God is a God of justice, compassion and moral clarity: He will rescue us. Haugen uses the Bible and real-life examples to illustrate and solidify his claims, and he makes it clear that God's people play an important role in making justice a reality. Haugen writes: "If you think about it, two truths apply to everything that God wants accomplished on earth: (1) he could accomplish it on his own through supernatural power; but instead, (2) he chooses for the most part to limit himself to accomplishing that which he can achieve through the obedience of his people" (97).

Haugen has found that coercion and deception are two components present whenever injustice is perpetrated. In his book, he not only demystifies injustice through a process of naming and explaining the fundamental tools people use to propagate injustice, Haugen also demonstrates practical ways to investigate injustice based on whether coercion or deception is employed in the process of victimization.

Additionally, Haugen analyzes how to choose interventions and apply different methods to help bring justice to those who have been oppressed. The interventions he explores range from spiritual intercession to legal sanction and even public shame.

Haugen ends his book with a much-needed reminder that we are a part of the body of Christ and that together we can accomplish much more than we can individually. God calls people to many different vocations: shepherds and teachers, frontline workers, country and culture experts, public justice professionals, international business people and professionals, and storytellers and communicators. Haugen's book can help empower all of us to work together so that God's justice is manifested in this troubled world.

---Victoria Peterson-Hilleque
---Used with permission from Christians for Biblical Equality

" Good News About Injustice is a biblical, practical and soul-stirring guide for the Church."

"If you like brushing difficult issues under the carpet then don't read this book!"

"The tenth-anniversary edition indicates how enduring and inspirational Haugen's work continues to be for many Christian groups."

▼▲
I'm the author/artist and I want to review Good News About Injustice: A Witness of Courage in a Hurting World.
Back
Back