Skip to main content
SPRING CYBER EVENT STARTS NOW: And it's a really BIG deal! Up to 88% off through 5/24>
Abingdon Old Testament Commentaries - Ruth - eBook
By: Judy Fentress-Williams
Stock No: WW27960EB 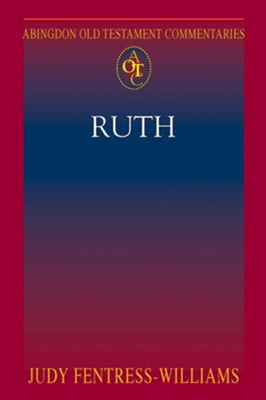 Described by Goethe as “the most charming little whole” of antiquity, Ruth has long been recognized for its literary quality. This beautifully composed narrative continues to attract readers across generations and boundaries of gender, class and ethnicity. In fact, the beauty of the book often distracts from the practical nature of the narrative. For all of its appeal, Ruth is, after all a story about family and survival. The marriage between Ruth and Boaz is a levirate marriage. The goal of this practice is to ensure the continuation and stability of the family line. Thus this “charming little whole” has as its subject preservation of life in the face of death and upholding memory to ward off the loss of identity.

This story of survival is short; it consists of four chapters with elements of loss and recovery; famine and harvest, barrenness and fruitfulness, life and death. These elements afford the book a broad appeal as it speaks to various stages and seasons of life, all the while upholding the power of faithfulness against an ever-changing backdrop. Named after one of the major characters, the book of Ruth tells the story of Naomi of Bethlehem and her family “in the days when the judges ruled.”

So much of what happens in Ruth happens where no one can see. Ruth binds herself to Naomi in the “in between place” of Moab and Judah. No one is there to witness it. Similarly, Ruth asks Boaz for redemption in the middle of the night when we presume everyone else is asleep. These events allow for the inclusion of Ruth as Boaz’s people, first as a gleaner and then as a wife. The pattern of what happens away from our observation and then bursts forth where we can see it draws on the images of planting and harvest, conception and birth. On a theological level, it suggests that even in the famine times, God is planting seed, preparing for the next harvest, even when we cannot see it. We must assume then, that whatever we know or recognize about the work of God is only a small piece of the larger whole. We cannot know it all.

▼▲
Judy Fentress-Williams (AB Princeton; MDiv and PhD Yale) is Professor of Old Testament at Virginia Theological Seminary since 2002 and taught previously at Hartford Seminary. She is author of several publications, including the Abingdon Old Testament Commentary: Ruth.

▼▲
I'm the author/artist and I want to review Abingdon Old Testament Commentaries - Ruth - eBook.
Back
Back