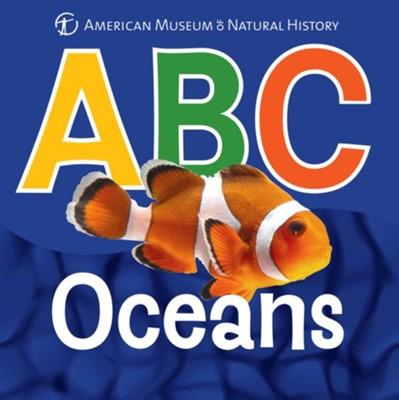 ▼▲
From Anemone to Zooplankton, this big, colorful board book—developed with the American Museum of Natural History—will enchant and educate children! Filled with eye-catching photos of 26 sea animals, it features fun facts about each creature even as it teaches the ABCs. Kids will love meeting the great white shark, jellyfish, narwhal, octopus, vampire squid, and more!

▼▲
The American Museum of Natural History in New York City is one of the largest and most respected museums in the world. Since the Museum was founded in 1869, its collections have grown to include more than 32 million specimens and artifacts relating to the natural world and human cultures. The Museum showcases its collections in the exhibit halls, and, behind the scenes, more than 200 scientists carry out cutting-edge research. It is also home to the Theodore Roosevelt Memorial, New York State's official memorial to its 33rd governor and the nation's 26th president, and a tribute to Roosevelt's enduring legacy of conservation. Approximately five million people from around the world visit the Museum each year. Plan a trip to the Museum, home of the world's largest collection of dinosaur fossils, or visit online at amnh.org.

▼▲
I'm the author/artist and I want to review ABC Oceans.
Back
×