We are OPEN and SHIPPING - click here for shipping estimates
Abandonment to Divine Providence
By: Father Jean Pierre de Caussade 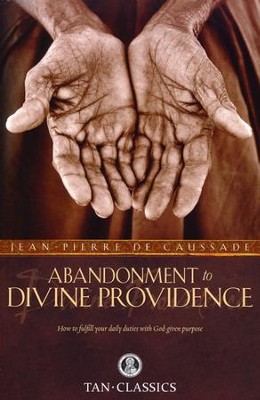 ▼▲
Do you doubt? Do you suffer? Are you anxious about the trials of life? Father de Caussade's Abandonment to Divine Providence offers the one sure solution to any spiritual difficulty: abandon yourself entirely to God by embracing the duties of your station in life. With wisdom and gentleness he teaches how to practice complete submission to the will of God in every situation, whether we are beginners or seasoned travelers on the way of perfection. True abandonment, he explains, is a trusting, peaceful, and childlike surrender to the guidance of grace. 128 pp.

▼▲
Father Jean-Pierre de Caussade was born at Cahors, France in 1675. He is commonly recognized for his instructional letters to the Nuns of the Visitation, whom he served as a spiritual director for seven years. In addition, he spent some time preaching in southern and central France, as well as serving as a theological student director in Toulouse. Jean-Pierre also served as a college rector. He died on December 8, 1751.

Father Caussade is the author of On Prayer, Abandonment to Divine Providence, A Treatise on Prayer from the Heart, and Spiritual Letters.

▼▲
I'm the author/artist and I want to review Abandonment to Divine Providence.
Back
×
Back
×