We are OPEN and SHIPPING - click here for shipping estimates
PRE-SUMMER CYBER SALE EXTENDED thru 6/1 ~ Over 2,500 items up to 90% off
The Abacus and the Cross: The Story of the Pope Who Brought the Light of Science to the Dark Ages
By: Nancy Marie Brown 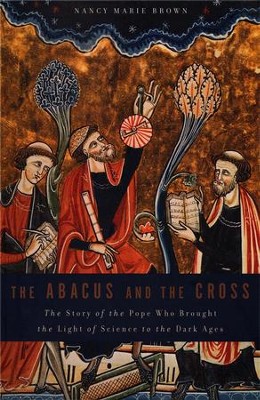 The Abacus and the Cross: The Story of the Pope Who Brought the Light of Science to the Dark Ages

▼▲
The popular picture of the dark ages is wrong. People knew the earth wasn't flat. They weren't terrified that teh world would end at the turn of the millennium. And the Medieval Catholic church was not intolerant or anti-science. In fact, the Pope, who was reigning in 1000AD was leading mathematician and astronomer of his day.

Called "the scientist-pope" during his lifetime, Gerbert of Aurillac was born a peasant, but ascended to the pinnacle of the Christian world to become Pope Sylvester II. In The Abacus and the Cross acclaimed science writer Nancy Marie Brown nimbly follows Gerbert through scientific exploration and political scheming as he rose from peasant to Pope. Using Medieval letters and modern reportage to transport her reader to Gerbert's world, Brown shows how science was central to the lives of Monks, kings, and even Popes a thousand years ago.

▼▲
The medieval Catholic Church, widely considered a source of intolerance and inquisitorial fervor, was not anti-science during the Dark Ages—in fact, the pope in the year 1000 was the leading mathematician and astronomer of his day. Called “The Scientist Pope,” Gerbert of Aurillac rose from peasant beginnings to lead the church. By turns a teacher, traitor, kingmaker, and visionary, Gerbert is the first Christian known to teach math using the nine Arabic numerals and zero.

▼▲
Nancy Marie Brown is the author of The Far Traveler: Voyages of a Viking Woman and Mendel in the Kitchen, named one of the Best Sci-Tech Books of 2004 by Library Journal. She lives in Vermont.

▼▲
Library Journal
“A rags-to-riches saga&hellip;captures how the direction of history can be influenced by one person.... Had Gerbert lived longer and been more politically savvy, Brown's portrait makes one believe his ability to teach might have jump-started science before the Dark Ages enveloped Europe. VERDICT: Enjoyable to read, informative, and highly recommended for all history and history of science buffs.”

>Keith Devlin, Stanford University professor and author of Fibonacci's Bridge of Numbers: the Medieval Visionary and the Book that Launched the Modern World
“Nancy Marie Brown's book provides a fascinating, well researched, in depth study of the life and times of one of the key figures who brought modern arithmetic into Western Europe.”

Marilyn Yalom, author of Birth of the Chess Queen
“This book will change how you think about the so-called Dark Ages. Well-researched, well-written, and vividly illuminating.”

Pat Shipman, Professor of Anthropology at the Pennsylvania State University and author of Femme Fatale: Love, Lies, and the Unknown Life of Mata Hari
“Nancy Marie Brown again uses her extraordinary ability to bring medieval time to life in The Abacus and the Cross, in the person of the ‘Scientist Pope' Gerbert of Aurillac (later Pope Sylvester II). Working from sparse records, Brown manages to tell us of the remarkable scholar, brilliant mathematician, and inveterate punster who loved both his holy orders and luxurious living. She shows us a time in which the route to God lay through the study of science and math and when intellectual developments flowed across the boundaries of religion and empire in Eurasia. This is a remarkable book that reflects on our modern times on every page.”

Richard Rubenstein, author of Aristotle's Children: How Christians, Muslims, and Jews Rediscovered Ancient Wisdom and Illuminated the Middle Ages
“The Abacus and the Cross tells the fascinating, little known story of the ‘Scientist-Pope' Sylvester II (Gerbert of Aurillac), whom older writers long considered a practitioner of the Black Arts. In this vividly presented, scrupulously researched biography, Nancy Marie Brown shows how a few open-minded intellectuals illuminated the Dark Ages by importing scientific knowledge and methods into Christian Europe from Muslim Spain. Brown's descriptions of Gerbert's ‘magical' instruments, the abacus, celestial spheres, and astrolabe, as well as of his worship of a mathematically-inspired Creator, make important contributions to the history of medieval science.”

The New York Journal of Books
“Ms. Brown's easily readable history draws the reader into a world of political intrigue, the excitement of introducing the abacus and astrolabe to Europe, and the shaky ground that surrounding the broader culture of Europe around 1000. Her book is a useful reminder that clear and well-reasoned history is by no means simplistic. The story of d'Aurillac's life and papacy shows a medieval milieu more complex than oft portrayed.”
Maria Rosa Menocal, author of The Ornament of the World and co-author of The Arts of Intimacy
“Overflowing with illuminating material, The Abacus and the Cross is the biography of a vital moment we know precious little about: the second half of the tenth century, when Gerbert of Aurillac, the man who would be pope at the much-anticipated millennium, came of age. Among Brown's many virtues is her ability to weave the intellectual and the material into a seamless narrative, so that when her readers learn about what books the monks of a monastery might be copying—and how those volumes connect to the intellectual past and future—they are also going to learn the mechanics of the copying itself, beginning with the cultivation of the animals whose skins will become parchment. She has the scientist's eye for detail and the historian's gift of storytelling and she has not one but dozens of great stories to tell about this transformative moment in Latin Christendom, as it began to embrace the foundations of modern science and technology.”

Jeff Sypeck, author of Becoming Charlemagne
“A pleasure to read, The Abacus and the Cross draws readers into a world of intrigue, superstition, and scholarship. Nancy Marie Brown writes lucidly about math and science, finding important stories in the lives of medieval people who deserve to be widely remembered.”

Kirkus
“A thoroughly engrossing account of the Dark Ages and one of its Popes, both far less dark than popular histories teach.... The years around 1000 CE seem to be every medieval historian's favorite era, but Brown's welcome addition to the genre provides a lively, eye-opening portrait of a sophisticated Europe whose intellectual leaders showed genuine interest in learning.”

Science Writers Magazine
“As she reconstructs the strangely illuminated Europe of the Dark Ages, Brown reminds readers that the major conflicts in our world today—between Christianity and Islam, between religion and science—are products of our own age, not historical inevitabilities.”

Booklist
“As readably knowledgeable about Gerbert's political fortunes as about his intellectual influence, Brown is a lively narrator and interesting interpreter of Gerbert's life and world.  This portrait gives both the science and the history audiences something to talk about.”

▼▲
I'm the author/artist and I want to review The Abacus and the Cross: The Story of the Pope Who Brought the Light of Science to the Dark Ages.
Back
×
Back
×