A Year Down Yonder - eBook
By: Richard Peck 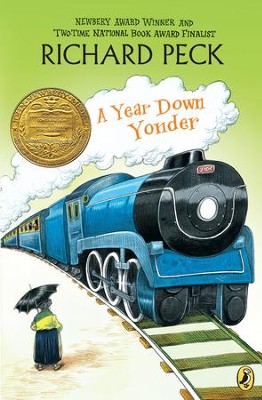 A Year Down Yonder - eBook

▼▲
Fifteen year old Mary Alice is facing a whole long year with Grandma! She remembers when she was a kid how much fun her summer stays with grandma were. They were jam packed with tons of surprises and drama. But grandma is well-known for shaking up her neighbors and everyone else! Mary Alice knows not to predict what this year is going to be like. Recommended for ages 10 to 14. The 2001 Newbery Medal winner.

Mary Alice's childhood summers in Grandma Dowdel's sleepy Illinois town were packed with enough drama to fill the double bill of any picture show. But now she is fifteen, and faces a whole long year with Grandma, a woman well known for shaking up her neighbors-and everyone else! All Mary Alice can know for certain is this: when trying to predict how life with Grandma might turn out . . . better not. This wry, delightful sequel to the Newbery Honor Book A Long Way from Chicago has already taken its place among the classics of children's literature.

RICHARD PECK (1934-2018) was born in Decatur, Illinois and lived in New York City for nearly 50 years. The acclaimed author of 35 novels for children and young adults, he won the Newbery Medal for A Year Down Yonder, a Newbery Honor for A Long Way from Chicago, the Scott O’Dell Award for The River Between Us, the Edgar Allen Poe Award for Are You in the House Alone?, a Boston Globe-Horn BookAward Honor for The Best Man, and the Christopher Medal for The Teacher’s Funeral. He was the first children’s author ever to have been awarded a National Humanities Medal, and was twice a National Book Award Finalist.

▼▲
"In this hilarious and poignant sequel to A Long Way to Chicago, Peck once again shows that country life is anything but boring." —Publishers Weekly, starred review

"With the same combination of wit, gentleness, and outrageous farce as Peck's Newbery Honor book, Long Way from Chicago, this sequel tells the story of Joey's younger sister, Mary Alice, 15, who spends the year of 1937 back with Grandma Dowdel in a small town in Illinois." —Booklist

▼▲
I'm the author/artist and I want to review A Year Down Yonder - eBook.
Back
×
Back
×