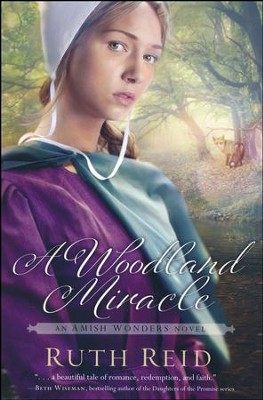 ▼▲
In their small northern Michigan district, where women outnumber men three to one, Grace doesn't believe she will ever attract a husband, especially with her limp. Tired of struggling both emotionally and physically, Grace is ready to see the specialist in Ohio, even if it means going against everything she's heard about God's grace being sufficient.

Ben Eicher is a young man from Pinecraft, Florida, whose carefree ways have caused him to lose his father's respect-again. According to Ben, though, life shouldn't be so serious that it suffocates all the fun. When he is sent to Michigan's Upper Peninsula to get his life back on track, he never thought it would mean working alongside a woman-especially a hardworking one like Grace. The last thing Grace wants is another friendship with a man who pities her.

Muscle weakness has left Grace Wagler with a broken body—and her childhood best friend has left her with a broken heart. She can hold her own in the timber camp (and do everything else the other women in Badger Creek can do), but in an Amish district where women outnumber men three to one, marriage is an unlikely prospect for a girl with bad legs.

Ben Eicher just arrived in Michigan from Pinecraft, Florida. When his most recent shenanigans proved too much for his daed’s patience, Ben was sent to the Upper Peninsula to work in the lumber camp—and he’s neither proud of his behavior nor thrilled about his new home.

But when Ben meets Grace, the struggling young woman quickly piques his curiosity. Of course, the last thing Grace wants is another friendship with a man who pities her. Tired of physical pain and romantic dead ends, Grace is ready to leave Badger Creek for the muscle specialist in Ohio, even if it contradicts her father’s wishes . . . and Ben’s.

Meanwhile, two dangerous men have found their way into the district. It isn’t long before their unsavory plans ensnare Grace and Ben in a chase that will not only endanger their lives . . . but test their love.

▼▲
'...Reid’s second series installment (after A Miracle of Hope) works well as a tender romance with a bit of suspense. A solid pick for fans of Beverly Lewis and Melody Carlson.' -- Library Journal

'When I read her first book in her Amish Wonders series, A Miracle of Hope, I was hooked. Needless to say, when the second novel [in] this series, A Woodland Miracle, arrived I was elated. But could it measure up to the first? Oh yes, indeed it could!... The story was well-written and the subplots intertwined nicely throughout. A Woodland Miracle can easily be read as a stand-alone. I highly recommend this excellent read. If you have not yet read any of Reid’s works, A Woodland Miracle will be the one to enchant you!” -- Destination Amish

▼▲
I'm the author/artist and I want to review A Woodland Miracle, Amish Wonders Series #2.
Back
Back