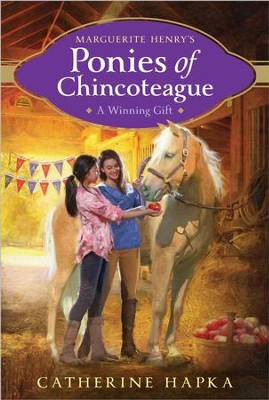 ▼▲
Maddie worries she might be giving up too much—especially Cloudy, her pony—in this fifth book in a contemporary middle grade series in the tradition of Marguerite Henry’s Misty of Chincoteague.

It’s almost Maddie’s birthday, and while snooping around for her hidden gifts (a family tradition), she stumbles across something that makes her think her mother is getting transferred again by the Air Force—this time overseas! Oh, no! What will that mean for Maddie and her pony, Cloudy? On top of that Maddie’s best friend Bridget has just broken up with her boyfriend, and it seems that Cloudy is the only thing that makes her feel better. Why does Maddie always have to be the one who’s making sacrifices?

▼▲
Catherine Hapka, a lifelong horse enthusiast, has written many books for young readers, including some in the Saddle Club, the Horse Diaries, and the A Circuit Novel series (with Georgina Bloomberg). She keeps three horses at her small farm in Lincoln University, Pennsylvania.

▼▲
I'm the author/artist and I want to review A Winning Gift - eBook.
Back
Back