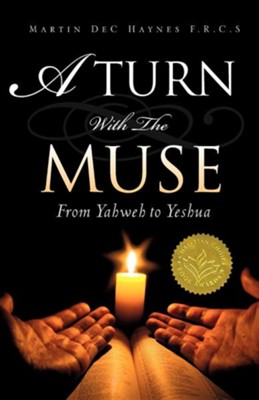 A Turn with the Muse

▼▲
A Turn with the Muse (From Yahweh to Yeshua) is a cleverly, crafted collection of rhyming poems which deals with very famous and also some less well-known but equally interesting stories in the bible. After writing prose and verse for a few decades, the author has certainly reached the level of the old masters. The book makes an interesting read whether one reads it intensely or makes a casual foray into it. For the effective outcome, Dr Martin Haynes was able to draw on his wide classical and medical background. Dr Martin Dec Haynes was born in Barbados. He attended Harrison College and emerged as an Island Scholar in Classical Studies. He went on to study Medicine at the University of Edinburgh, Scotland. He stayed-on to do postgraduate studies and obtain the specialist degree in Surgery. He returned and worked in Trinidad for many years, during which time he felt impelled to write poetry and short stories. He has a publishable manuscript of Puns, a large volume of poems called The Moving Finger which may be out before this one, A Turn With The Muse. There is another big collection of Poems to follow, the working title of which is The Albatross and Other Poems. He tries to play a little golf most days, and spends his time either in Trinidad, Barbados or Florida.

▼▲
I'm the author/artist and I want to review A Turn with the Muse.
Back