Skip to main content
BIBLE SALE OF THE SEASON: Save on over 2,100 Bibles thru 10/26. >
A Treasury of Miracles for Women: True Stories of God's Presence Today
By: Karen Kingsbury
Stock No: WW529605 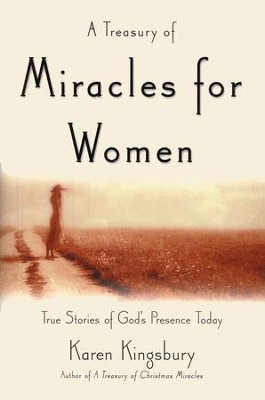 A Treasury of Miracles for Women: True Stories of God's Presence Today

▼▲
Created especially for women, A Treasury of Miracles for Women is a heartwarming collection of true stories about wondrous events in the lives of ordinary mothers, daughters, sisters, wives, and friends. Touched in extraordinary ways through miraculous events, answered prayers, and angelic encounters, these women's stories show how God is constantly at work in our lives and miracles are still possible!

▼▲
#1 New York Times bestselling author Karen Kingsbury shares a collection of inspiring true stories from women whose faith has sustained them through monumental trials. For mothers, wives, sisters, and friends, this book will uplift the hearts of its readers through accounts of faith proving triumphant over any obstacle.

▼▲
This book is indeed for women, if by women one means white, American, middle-class, conservative Christian mothers. But there's little reason to quibble; such women are exactly Kingsbury's target audience, and few of them will be disappointed by these stories of angels, medical miracles and mothers who really, really love their kids (the only exception being a "childless by choice" woman who really, really loves her house). While Kingsbury claims that these stories are true (there's no documentation or opportunity to corroborate this), she has clearly taken liberties with the dialogue; the conversations between doctors and anguished parents are straight out of 1960s-era medical dramas. The majority of the stories fit a pretty old chestnut of a formula: tragedy happens, the doctor says there's no hope, God intervenes (often in the form of an angel), the patient miraculously gets better, then the doctor shakes his head in disbelief, says that the recovery is inexplicable and admits that he was wrong. In more than one case, the wrong medical advice is, not surprisingly, to abort a gravely ill fetus. Two later chapters are a bit more compelling in that the sick person indeed dies, and the miracle is the good that comes from that death. There's little doubt that Kingsbury's subjects had astonishing experiences, but the nuance, texture and reality of those experiences are lost in the simplistic telling. Luis Palau's It's a God Thing packs the emotional punch Kingsbury is going for, but with considerably less treacle. (Apr. 4) Copyright 2002 Cahners Business Information.

▼▲
"If you have a friend who needs a ray of encouragement, take her a cup of tea and A Treasury of Miracles for Women. It is indeed a treasure chest full of true stories that proves God still answers prayers today."—Patricia Hickman, bestselling author of Tiny Dancer
"[Kingsbury] delivers . . . genuine emotional punch."
—Publishers Weekly
"Karen is a gifted writer who confronts the hard issues with truth and sensitivity."
—Francine Rivers, bestselling author of Redeeming Love

▼▲
I'm the author/artist and I want to review A Treasury of Miracles for Women: True Stories of God's Presence Today.
Back
Back