Skip to main content
SPRING CYBER EVENT STARTS NOW: And it's a really BIG deal! Up to 88% off through 5/24>
A Time for Peace - eBook
By: Barbara Cameron
Stock No: WW22574EB 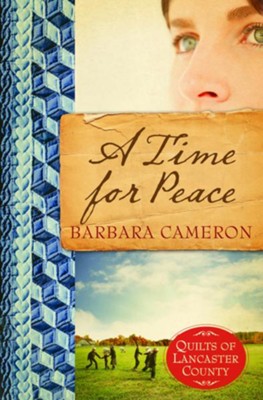 A Time for Peace - eBook

▼▲
After Years of Hardship, Jenny's Life Appears Perfect. So Why Does Something Seem to Be Missing?
Jenny Bontrager finally feels loved and cherished by her husband, Matthew, and his children. Life seems golden with both her family and career as a writer. Then one day her grandmother, Phoebe, falls ill, and Jenny cares for her. As she reaches into Phoebe's closet for a robe, Jenny finds a letter from her father dated the summer when she was nearly eighteen. As she struggles to understand her father's words, Jenny's love for him, and her recently renewed faith and trust in God are thrown into question again. And without warning, her perfect life is thrown into question . . .

▼▲
After Years of Hardship, Jenny’s Life Appears Perfect. So Why Does Something Seem to Be Missing?Jenny Bontrager is finally at a place of love and belonging with her husband, Matthew, and his children. Life seems golden with both her family and career as a writer.But everything Jenny now believes in is thrown into question with the discovery of a long-lost letter from her father. Her sense of peace and contentment destroyed by betrayal, Jenny struggles with her renewed faith--and the love of everyone around her.“Barbara Cameron has written another wonderful, sweet story that tugs at the emotions. Amish fiction fans will definitely want to add A Time for Peace to their library.” --Kathleen Fuller, best-selling author of A Summer Secret, A Hand to Hold, and The Secrets Beneath"A Time for Peace, Barbara Cameron's newest heartwarming story in the Quilts of Lancaster County series, invites readers to come on in, sit down around the table for a cup of tea while getting to know this Amish family where love is happening. When troubles and doubts come for Jenny, you'll be living her story with her and hoping she won't lose sight of that ribbon of love that so strongly binds these people together." Ann H. Gabhart, author of The Outsider, Summer of Joy, and Angel Sister"A Time for Peace is an inspirational story of working through some of the tough questions and situations life throws at us. Barbara Cameron gives us another endearing Amish tale in this Quilts of Lancaster County series." - FreshFiction.com

▼▲
From award-winning author Barbara Cameron comes A Time for Peace, Book 3 in the Quilts of Lancaster County series. Jenny Bontrager, an Amish woman with a complicated past as an Englisher, has a loving family and peaceful home. But when tragedy, illness, and betrayal strike Jenny's family, she is forced to face the doubts and fears that haunt her.

Throughout the novel, Cameron writes in an emotionally evocative style. The story centers on the complexities of relationships and develops an especially healthy view of Christ-centered marriages. Characters, though lacking much in the way of personal dimension, are portrayed as loyal members of a flawed family.

Because of physical injuries Jenny sustained during her years as an international news reporter, she is unable to have children. The story's main conflict stems from Jenny's insecurities surrounding this issue. Jenny's inability to communicate her feelings to her family creates emotional distance between herself and those she loves. When Jenny uncovers a letter that reveals a long-hidden family betrayal, her world is utterly shattered. It is only when Jenny's stepson, Joshua, is severely injured in an accident that she realizes the healing power of forgiveness and the renewing strength of hope.

Though Jenny Bontrager is characterized as a timid, distraught woman, she also possesses several strong and admirable traits. Her desire to be loved, her struggle for acceptance, and her battle to rise above everyday challenges paint an inspirational picture of the struggles that comprise motherhood. Throughout the story, positive themes of physical and spiritual healing uphold the message of Jeremiah 30: 17, which says, "'For I will restore health to you and heal you of your wounds,' says the Lord."

A Time for Peace is a novel that can be compared to a buggy ride across the Pennsylvania countryside. The first few miles of scenery are pleasant, but before long the view can become tiresome and dull. During the first chapters of her story, Cameron does an admirable job of forming a new perspective on Amish life. However, she fails to sustain interest throughout the book. The remainder of the plot sometimes seems contrived and the accented dialogue can become stilted. Nonetheless, the novel contains enough warm, family drama to keep fans of Amish Christian fiction in the buggy until the end of the ride, regardless of how many times they are jostled in their seats. Kari Lynn Travis, www.ChristianBookPreviews.com

▼▲
I'm the author/artist and I want to review A Time for Peace - eBook.
Back
Back