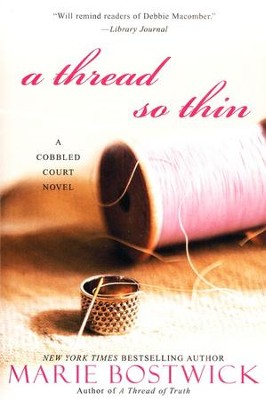 A Thread So Thin

▼▲
In Marie's sixth novel, the youngest memeber of the Cobbled Court Quilt Circle stands at a crossroads that women of all ages can relate to. Liza, the once-rebellious granddaughter of town leader Abigail Spaulding, is finishing art school in New York City. Having struggled to find herself, Liza is torn. Does she accept the proposal of Evelyn's son, Garrett, or pursue a once-in-a-lifetime career opportunity in far-away Chicago? Everyone in New Bern has a different opinion, especially all those quilters. If only Liza could decide.

▼▲
New York Times bestselling author Marie Bostwick crafts a timeless tale of friendship, love, and the choices we must make in their name. . .

While New Bern, Connecticut, lies under a blanket of snow, the Cobbled Court Quilt Shop remains a cozy haven for its owner, Evelyn Dixon, and her friends. Evelyn relishes winter's slower pace--besides, internet sales are hopping, thanks to her son Garrett's efforts. In addition to helping out at the shop, Garrett has also been patiently waiting for his girlfriend, Liza, to finish art school in New York City. But as much as Evelyn loves Liza, she wonders if it's a good idea for her son to be so serious, so soon, with a young woman who's just getting ready to spread her wings. . .

Liza's wondering the same thing--especially after Garrett rolls out the red carpet for a super-romantic New Year's Eve--complete with marriage proposal. Garrett's the closest thing to perfect she's ever known, but what about her own imperfections? The only happy marriage Liza's ever seen is her Aunt Abigail's, and it took her decades to tie the knot. Soon, Liza is not only struggling with her own fears, but with the mixed reactions of her friends and family. And when she finds herself torn between a rare career opportunity and her love for Garrett, Liza must grasp at the thinnest of threads--and pray it holds. . .

▼▲
Marie Bostwick Skinner was born and raised in the northwest. In the three decades since her marriage, Marie and her family have moved frequently, living in eight different states at eighteen different addresses, three of them in Texas. These experiences have given Marie a unique perspective that enables her to write about people from all walks of life and corners of the country with insight and authenticity. Marie currently resides in Connecticut where she enjoys writing, spending time with family, helping out at church, gardening, collecting fabric, and stitching quilts. Visit her at www.mariebostwick.com.

▼▲
I'm the author/artist and I want to review A Thread So Thin.
Back
×
Back
×