Skip to main content
A Thorn in My Flesh
By: Joan H. Richardson
Stock No: WW974051 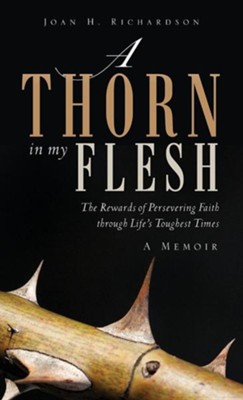 A Thorn in My Flesh

▼▲
Joan Richardson enjoyed the anonymity of being "Joanie" on the contemporary Christian radio show known as Man Alive The nationally and internationally syndicated program aired for nearly nine years, from 1975-1984. Man Alive was the tool of God's workmanship as two people, Mike and Joanie, became one through both marriage and ministry. A powerful turning point in her life occurred at a Kathryn Kuhlman meeting in 1974: ." . . We stood at our places as she continued, when a deep audible male voice spoke to me. The sound came from behind or above me; not from a man, this was a supernatural moment. He said, 'She is not going to be living much longer; I am going to give you her mantle.' Lacking preparation to hear these words, at first I resisted. I could not accept that the evangelist had not much longer to live. Stunned, I thought, 'How can that be? Of all people, why would God choose me? With my history?' His words astonished me. I nearly heard myself respond, 'No No ' At the moment, I wasn't sure... was it an angel? Was it the voice of God? Immediately after He spoke, Miss Kuhlman announced, 'I have something to tell you . . . '" Only those closest to Joan knew her amazing story until now. Though her struggles through life have been great, she has met them with persevering faith. Joan's ongoing and progressive victories over the ravages and devastation of mental illness are inspirational. From start to finish, as you read A Thorn in My Flesh, the God who watches over her will amaze you.

▼▲
I'm the author/artist and I want to review A Thorn in My Flesh.
Back