Skip to main content
A Theology of the Laity
By: Hendrik Kraemer
Stock No: WW3830317 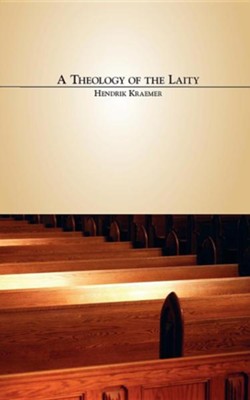 A Theology of the Laity

▼▲
The laity (the body of ordinary lay-members of the Church) has seldom enjoyed the distinction of being treated with care and thoroughness as a matter of specific theological importance or significance. The subsidiary treatment by the professional theologians, argues Hendrick Kraemer, "is an inexcusable lack and an indication of a partly mis-oriented understanding of the Church in its wholeness." Kraemer's A Theology of the Laity, first published in 1958 was one of the first comprehensive attempts at constructing a theology of the whole people of God. It remains a foundational and important work on the subject. Hendrik Kraemer (1888-1965), a layman, was a Dutch Reformed theologian, linguist, and missiologist is recognized as one of the most significant theologians of Christian mission. Kraemer studied Indonesian languages at Leiden University and was awarded a PhD. in 1922. He then served with the Netherlands Bible Society in Indonesia until 1937, when he as appointed professor of the history and phenomenology of religion at Leiden Unversity. From 1948-1955 Kraemer served as the first director of the World Council of Churches' Ecumenical Institute at Chateau de Bossey, Celigny near Geneva. Following his return from Indonesia, Kraemer involved himself heavily in the Dutch church and in mission work, contributing significantly to the revival of the Cutch Reformed church after World War II. One of his last endeavours was to develop "a theology of the laity."

▼▲
I'm the author/artist and I want to review A Theology of the Laity.
Back