Skip to main content
OUR BIGGEST BARGAIN SALE EVER: Over 6,000 deals at never-seen-before prices ~ through 8/23. Shop now >
A Teacher's Life
Edited By: Robert B. Talisse, Maureen Eckert
Stock No: WW286672 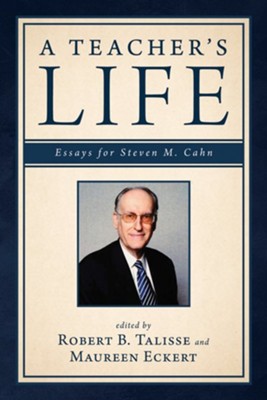 ▼▲
Steven M. Cahn belongs to that exclusive class of professors who have not only contributed influentially to the leading debates of their discipline, but have also written insightfully about the academic vocation itself. This volume comprises thirteen essays, authored by Cahn's colleagues and former students, presented in his honor on the occasion of his twenty-fifth year as professor of philosophy at the City University of New York. The essays focus on topics that have been central to Cahn's philosophical work, such as the teaching of philosophy, the responsibilities of philosophy professors, the nature of happiness, and the concept of the good life. CONTRIBUTORS: Norman Bowie, Steven M. Cahn, Randall Curren, Maureen Eckert, Alan Goldman, Tziporah Kasachkoff, Peter Markie, John O'Connor, David Rosenthal, David Shatz, George Sher, Robert Simon, Douglas Stalker, Robert B. Talisse, Christine Vitrano

▼▲
I'm the author/artist and I want to review A Teacher's Life.
Back