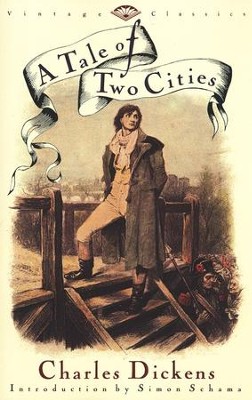 ▼▲
The most famous and possibly the most popular of Dickens's novels, A Tale of Two Cities shows a master of dramatic narrative extracting gold from the ore of history. If the bloody tableau of the French Revolution were not in itself sufficient for a dozen novels, Dickens added to it a professional resurrectionist, an authentic ogress, and an antihero as convincingly flawed as any in modern literature. Here, too, are all of Dickens's recurring themes - imprisonment, injustice, and cataclysmic violence, resurrection and the renunciation that makes renewal possible.

▼▲
Set against the backdrop of the French Revolution, A Tale of Two Cities is one of Charles Dickens’s most popular and dramatic stories.

It begins on a muddy English road in an atmosphere charged with mystery and it ends in the Paris of the Revolution with one of the most famous acts of self-sacrifice in literature. In between lies one of Dickens’s most exciting books—a historical novel that, generation after generation, has given readers access to the profound human dramas that lie behind cataclysmic social and political events. Famous for its vivid characters, including the courageous French nobleman Charles Darnay, the vengeful revolutionary Madame Defarge, and cynical Englishman Sydney Carton, who redeems his ill-spent life in a climactic moment at the guillotine ("It is a far, far better thing that I do, than I have ever done"), the novel is also a powerful study of crowd psychology and the dark emotions aroused by the Revolution, illuminated by Dickens’s lively comedy.

With an Introduction by Simon Schama

▼▲
"[A Tale of Two Cities] has the best of Dickens and the worst of Dickens: a dark, driven opening, and a celestial but melodramatic ending; a terrifyingly demonic villainess and (even by Dickens’ standards) an impossibly angelic heroine. Though its version of the French Revolution is brutally simplified, its engagement with the immense moral themes of rebirth and terror, justice, and sacrifice gets right to the heart of the matter . . . For every reader in the past hundred and forty years and for hundreds to come, it is an unforgettable ride." –from the Introduction by Simon Schama