Skip to main content
SPRING CYBER EVENT STARTS NOW: And it's a really BIG deal! Up to 88% off through 5/24>
A Tale of Two Cities - eBook
By: Charles Dickens
Stock No: WW10901EB 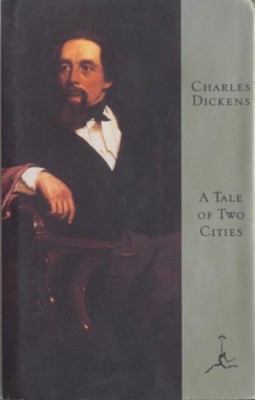 ▼▲
A Tale of Two Cities is Charles Dickens's great historical novel, set against the violent upheaval of the French Revolution. The most famous and perhaps the most popular of his works, it compresses an event of immense complexity to the scale of a family history, with a cast of characters that includes a bloodthirsty ogress and an antihero as believably flawed as any in modern fiction. Though the least typical of the author's novels, A Tale of Two Cities still underscores many of his enduring themes--imprisonment, injustice, and social anarchy, resurrection and the renunciation that fosters renewal.

▼▲
Charles Dickens was born on February 7, 1812, in Portsmouth, England, where his father was a naval pay clerk. When he was five the family moved to Chatham, near Rochester, another port town. He received some education at a small private school, but this was curtailed when his father's fortunes declined. More significant was his childhood reading, which he evoked in a memory of his father's library: "From that blessed little room, Roderick Random, Peregrine Pickle, Humphrey Clinker, Tom Jones, The Vicar of Wakefield, Don Quixote, Gil Blas and Robinson Crusoe came out, a glorious host, to keep me company. They kept alive my fancy, and my hope of something beyond that place and time."

When Dickens was ten the family moved to Camden Town, and this proved the beginning of a long, difficult period. (He wrote later of his coach journey, alone, to join his family at the new lodgings: "I consumed my sandwiches in solitude and dreariness, and it rained hard all the way, and I thought life sloppier than I had expected to find it.") When he had just turned twelve Dickens was sent to work for a manufacturer of boot blacking, where for the better part of a year he labored for ten hours a day, an unhappy experience that instilled him with a sense of having been abandoned by his family: "No advice, no counsel, no encouragement, no consolation, no support from anyone that I can call to mind, so help me God!" Around the same time Dickens's father was jailed for debt in the Marshalsea Prison, where he remained for fourteen weeks. After some additional schooling, Dickens worked as a clerk in a law office and taught himself shorthand; this qualified him to begin working in 1831 as a reporter in the House of Commons, where he was known for the speed with which he took down speeches.

By 1833 Dickens was publishing humorous sketches of London life in the Monthly Magazine, which were collected in book form as Sketches by 'Boz' (1836). These were followed by the publication in installments of the comic adventures that became The Posthumous Papers of the Pickwick Club (1837), whose unprecedented popularity made the twenty-five-year-old author a national figure. In 1836 he married Catherine Hogarth, who would bear him ten children over a period of fifteen years. Dickens's energies enabled him to lead an active family and social life, including an indulgence in elaborate amateur theatricals, while maintaining a literary productiveness of astonishing proportions. He characteristically wrote his novels for serial publication, and was himself the editor of many of the periodicals--Bentley's Miscellany, The Daily News, Household Words, All the Year Round--in which they appeared. Among his close associates were his future biographer John Forster and the younger Wilkie Collins, with whom he collaborated on fictional and dramatic works. In rapid succession he published Oliver Twist (1838), Nicholas Nickleby (1839), The Old Curiosity Shop (1841), and Barnaby Rudge (1841), sometimes working on several novels simultaneously.

Dickens's celebrity led to a tour of the United States in 1842. There he met Longfellow, Irving, Bryant, and other literary figures, and was received with an enthusiasm that was dimmed somewhat by the criticisms Dickens expressed in his American Notes (1842) and in the American chapters of Martin Chuzzlewit (1844). The appearance of A Christmas Carol in 1843 sealed his position as the most widely popular writer of his time; it became an annual tradition for him to write a story for the season, of which the most memorable were The Chimes (1844) and The Cricket on the Hearth(1845). He continued to produce novels at only a slightly diminished rate, publishing Dombey and Son in 1848 and David Copperfield in 1850; of the latter, his personal favorite among his books, he wrote to Forster: "If I were to say half of what Copperfield makes me feel tonight how strangely, even to you, I should be turned inside out! I seem to be sending some part of myself into the Shadowy World."

From this point on his novels tended to be more elaborately constructed and harsher and less buoyant in tone than his earlier works. These late novels include Bleak House (1853), Hard Times (1854), Little Dorrit (1857), A Tale of Two Cities (1859), and Great Expectations (1861). In the Preface to A Tale of Two Cities, Dickens' mentions that he thought of the idea for his great novel of the French Revolution when he was acting in Wilkie Collins's The Frozen Deep. He became involved with a fellow cast member, the young actress Ellen Ternan, an association that lead Dickens to separate from his wife in 1858; a scandal that alienated him from many of his former associates and admirers.

Our Mutual Friend, published in 1865, was his last completed novel, and perhaps the most somber and savage of his later works. Dickens was weakened by years of overwork and by a near-fatal railroad disaster during the writing of Our Mutual Friend. Nevertheless he embarked on a series of public readings, including a return visit to America in 1867, which further eroded his health. A final work, The Mystery of Edwin Drood, a crime novel much influenced by Wilkie Collins, was left unfinished upon his death on June 9, 1870, at the age of fifty-eight.

▼▲
I'm the author/artist and I want to review A Tale of Two Cities - eBook.
Back
Back