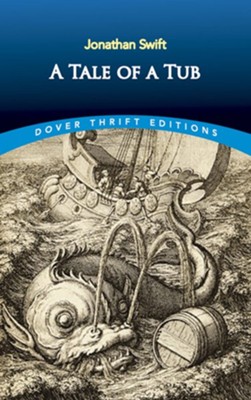 A Tale of a Tub

▼▲
Published anonymously in 1704, this prose satire by the author of Gulliver's Travels presents a story of three brothers, each symbolizing a Christian sect, and an unrelated series of digressions. The "tale" portion centers on Peter, Martin, and Jack, who respectively represent Roman Catholicism, Lutheranism, and other dissenting Protestant sects. Charged with maintaining their coats — the Christian faith — exactly as issued, the brothers immediately proceed to make alterations. Jonathan Swift's historical allegory ridicules the conflicts between religious factions, and his digressions offer ironic views of contemporary trends in literature, politics, and theology.
Swift's assault on the corruption of the ancient church and the fanaticism of reformers was widely misunderstood at the time of its publication, when England's religion and government were closely linked, causing the author endless problems with churchmen and politicians alike. Acerbic in style and exuberantly witty, A Tale of a Tub remains a powerful parody that ranks among the English language's best satires.

▼▲
Born in Dublin, Jonathan Swift (1667–1745) studied at Trinity College and was eventually ordained as a priest. Most of his books were first published anonymously or under a pseudonym, including Gulliver's Travels, his most famous work.

▼▲
I'm the author/artist and I want to review A Tale of a Tub.
Back