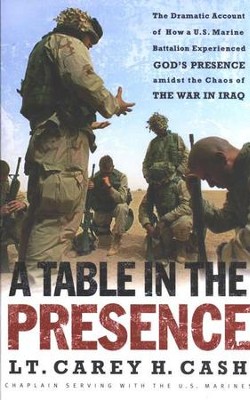 A Table in the Presence

▼▲
Faced with the task of seizing Saddam Hussein's palace in Baghdad, the 1st Marine battalion ran headlong into armed loyalist forces. When the smoke of the 8-hour conflict cleared, only one American soldier was dead. Chaplain Cash tells the story of the undeniable miraculous presence of God in this decisive battle of the Iraq war. 240 pages, softcover from Nelson.

On April 10th, 2003, the 1st Battalion, 5th Marine Regiment, faced with the task of seizing the presidential palace in downtown Baghdad, ran headlong into what Lieutenant Colonel Oliver North called, "the worst day of fighting for U.S. Marines." Hiding in buildings and mosques, wearing civilian clothes, and spread out for over a mile, Saddam Hussein's militants rained down bullets and rocket propelled grenades on the 1st Battalion. But when the smoke of the eight-hour battle cleared, only one Marine had lost his life. Some said the 1st Battalion was incredibly lucky. But in the hearts and minds of the Marines who were there, there was no question. God had brought them miraculously through that battle.

As the 1st Battalion's chaplain, Lieutenant Carey Cash had the unique privilege of seeing firsthand, from the beginning of the war to the end, how God miraculously delivered, and even transformed, the lives of the men of the 1st Battalion.

▼▲
I'm the author/artist and I want to review A Table in the Presence.
Back
Back