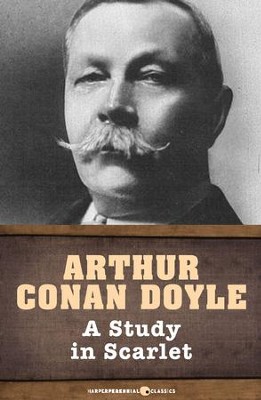 A Study in Scarlet - eBook

Doctor John Watson is looking for a new place to live when he is introduced to Sherlock Holmes, a peculiar man who happens to be looking for a roommate. Watson soon finds himself fascinated by Holmes’ numerous eccentricities—including the ability to deduce information about people without ever speaking to them. When a body is found next to the hastily scrawled word “RACHE,” Holmes’ scientific study of deduction is put to the test as Dr. Watson joins him in what will be the first of many thrilling investigations.

A Study in Scarlet is the first of Sir Arthur Conan Doyle’s works to feature the now legendary detective Sherlock Holmes and his partner Dr. John Watson. Doyle’s Sherlock Holmes stories have been adapted numerous times, including the 2009 and 2011 movies starring Jude Law and Robert Downey Jr., and for the popular television shows Elementary, starring Jonny Lee Miller and Lucy Liu, and the BBC’s Sherlock, starring Benedict Cumberbatch and Martin Freeman.

Sir Arthur Conan Doyle was born in Edinburgh, Scotland, in 1859. Before starting his writing career, Doyle attended medical school, where he met the professor who would later inspire his most famous creation, Sherlock Holmes. A Study in Scarlet was Doyle's first novel; he would go on to write more than sixty stories featuring Sherlock Holmes. He died in England in 1930.

▼▲
I'm the author/artist and I want to review A Study in Scarlet - eBook.
Back
Back