Skip to main content
A Stranger at Fellsworth - eBook
By: Sarah E. Ladd
Stock No: WW86187EB 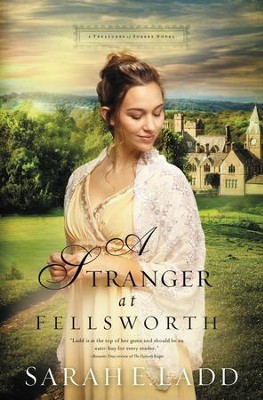 A Stranger at Fellsworth - eBook

Sarah E. Ladd is an award-winning, bestselling author who has always loved the Regency period--the clothes, the music, the literature, and the art. A college trip to England and Scotland confirmed her interest in the time period, and she began seriously writing in 2010. Since then, she has released several novels set during the Regency era. Sarah is a graduate of Ball State University and holds degrees in public relations and marketing. She lives in Indiana with her family. Visit Sarah online at SarahLadd.com; Instagram: @sarahladdauthor; Facebook: @SarahLaddAuthor; Twitter: @SarahLaddAuthor; Pinterest: @SarahLaddAuthor.

▼▲
“This novel reads well and fast; its vivid imagery and likeable characters fill the pages. The well-crafted metaphors and tight sequences make for an absorbing read. Though set around the Regency period, the style is fresh and the voice genuine. The spiritual aspect of the novel does not overpower; it is woven into the plot and provides a graceful way to unite the beliefs and morals of Annabelle and Owen Locke. I want to read more in the series.” -- Historical Novel Society

'With betrayals, murders, and criminal activity disrupting the peace at Fellsworth, Ladd fills the pages with as much intrigue as romance. Inspirational references are limited to a few mentions of prayers. A well-crafted story for fans of Regency novels.' -- Publishers Weekly

'Once again, Ladd delights readers with a skillfully plotted, suspenseful page-turner. . . Like all superior novelists, Ladd doesn’t default to pat endings, offering even her villains a potential happily-ever-after by putting her faith (not to mention the characters’ and the readers’) in God’s abiding mercy.' -- RT Book Reviews, 4 stars

'Ladd’s third Regency outing (after Dawn at Emberwilde and The Curiosity Keeper) can easily stand on its own, but readers who enjoy this book will want to devour the trilogy.' -- Library Journal

▼▲
I'm the author/artist and I want to review A Stranger at Fellsworth - eBook.
Back
Back