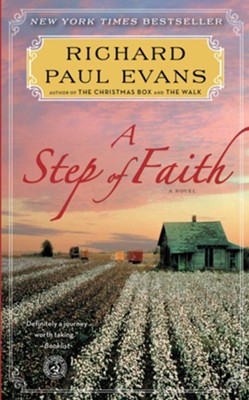 After the death of his beloved wife, after the loss of his advertising business to his once-trusted partner, after bankruptcy forced him from his home, Alan Christoffersen is a broken man. Leaving everything he knows, he sets out on an extraordinary cross-country journey; with only the pack on his back, he is walking from Seattle to Key West—the end of the map.

Along the way, Alan begins to heal, meeting people who teach him lessons about love, sacrifice, and forgiveness. But in St. Louis, Alan faces another life-changing crisis, and now the journey is in jeopardy.

▼▲
Richard Paul Evans is the #1 bestselling author of The Christmas Box. Each of his more than twenty-five novels has been a New York Times bestseller. There are more than twenty million copies of his books in print worldwide, translated into more than twenty-four languages. He is the recipient of numerous awards, including the American Mothers Book Award, the Romantic Times Best Women’s Novel of the Year Award, the German Audience Gold Award for Romance, two Religion Communicators Council Wilbur Awards, the Washington Times Humanitarian of the Century Award and the Volunteers of America National Empathy Award. He lives in Salt Lake City, Utah, with his wife, Keri, and their five children. You can learn more about Richard on Facebook at  Facebook.com/RPEFans, or visit his website, RichardPaulEvans.com.

▼▲
I'm the author/artist and I want to review A Step of Faith, Walk Series #4 -eBook.
Back
Back