A Spirituality of Perfection
By: Patrick J. Hartin 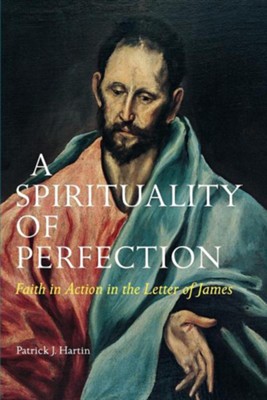 A Spirituality of Perfection

▼▲
Throughout this century the Letter of James has been viewed consistently as a disjointed set of instructions. Father Haqrtin deviates radically from this approach. He shows that the "call for perfection" provides a unifying meaning for the letter. Examining the concept of perfectoin against the background of the Greco-Roman world, the Old Testament, and the Septuagint, the author shows that perfection provides a key to define the spirituality of the Letter of James. It offers an understanding of God and of the way one is called "to be in the the world." Hartin adopts a fresh approach toward understanding the categories of wisdom, eschatology, and apocalyptic as they illuminate the letter's advise.

Throughout this century the Epistle of James has been viewed consistently as a disjointed set of instructions. In A Spirituality of Perfection Patrick Hartin differs from this approach by showing that the call for perfection" provides a unifying meaning for the epistle. Examining the concept of perfection against the background of the Graeco-Roman world, the Old Testament, and the Septuagint, Father Hartin shows that perfection provides a key to defining the spirituality of the Epistle of James.

Father Hartin shows how the notion of perfection plays a key role in the definition of God, as well as the way one is called *to be in the world. - He adopts a fresh approach toward understanding the categories of wisdom, eschatology, and apocalyptic as they illuminate the epistle's advice. He allows James to be read in its own right, instead of through the eyes of other traditions, such asPaul, and shows that what James intends by perfection is different from our modern understanding - that the concept of perfection unlocks an important self-understanding in Christianity.

Just as every generation of believers aims at putting its faith into action, A Spirituality of Perfection culminates with the question: *What direction does the Epistle of James give Christians of the twenty-first century for putting their faith into action? -

▼▲
Hartin is the leading authority on the Epistle of James, and it is important that he gives us in this new work insight into his understanding of this often neglected New Testament text.
James M. Robinson, Director, Institute for Antiquity and Christianity, Claremont Graduate University

Hartin's insightful study enables us to recognize the plurality of our Christian tradition, which resonates the postmodern consciousness struggling with diversity and multiculturalism. This book is a good place to begin to understand the distinctive message of James' letter and a significant contribution to the ongoing scholarly discussion about the diversity and emergence of early Christianity.
Risto Uro, University of Helsinki

This is an exemplary work, lucidly argued and attentive both to ancient sources and to modern exegetical opinion.
John S. Kloppenborg Verbin, Faculty of Theology, University of St. Michael's College

Hartin presents James as an exciting witness to the beauty and diversity of early Christianity, and introduces readers to a James they never knew before.
Leonard Doohan, Dean Graduate School, Gonzaga University

Father Hartin deserves gratitude for his scholarly, but heart-driven, defense of James' letter.
The Catholic Journalist

▼▲
I'm the author/artist and I want to review A Spirituality of Perfection.
Back
×