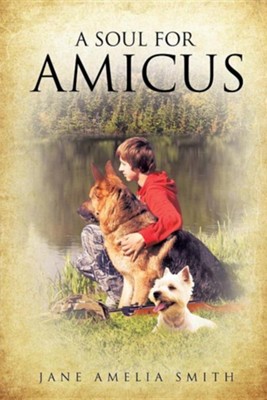 A Soul for Amicus

▼▲
Do you believe animals have a soul and that following their physical death their soul is received into heaven? This twofold question is asked more often than not of our Christian clerics. It is a question which seriously befuddles many, amuses some, and irritates and mortifies still others. Following the death of dog handler Marine Corporal David Devonshire while on deployment in Iraq, his canine partner, a German shepherd, Sergeant Amicus, is adopted by the Corporal's young family. Spurred on by their adopted charge, the Corporal's widow, Kate Devonshire and son Luke, endeavor to find their own answer to this vexing question. Life is never the same for Kate and Luke after Amicus joins the Devonshire household. Through this endearing creature, the Corporal's family experiences a release from the constraints of their sorrow, allowing them to once again embrace God's promise of new beginnings. This story takes the reader full circle and Amicus serves as a reminder that though God's creatures may live but in the shadows of our busy lives, they never fail in their own unique way to make an indelible impression. Then, when the time comes for them to leave us, more often than not we are left, better people because of them. Jane Amelia Smith was born and raised on Long Island, New York. After earning an M.A. degree in Health Education from New York University, she worked in the field of health promotion. She holds a Public School Teacher, as well as a Registered Nurse license. In addition, she served ten years as a reservist in the U.S. Army Nurse Corp, receiving an honorable discharge at the rank of Major. Widowed in 2007, she currently lives at Smith Mountain Lake, in Virginia. This is her second novel.

▼▲
I'm the author/artist and I want to review A Soul for Amicus.
Back