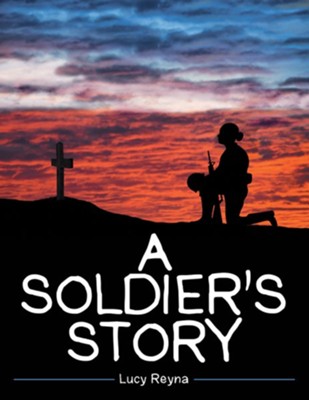 A Soldier’s Story is a book about a mother who deploys overseas, with her two young children awaiting her return. While this book is fiction, it was written in real-time and based off of actual experiences by a soldier mom writing to her children about her days/ nights. And, also how her faith kept her safe and sound until they were reunited again.

Lucille Reyna is a combat veteran, currently serving in the USAF Reserve as a paralegal. She is a Jesus lovin’ homemaker, passionate writer, organic foodie, hobby prepper, animal friend, homeschool mom and avid advocate for natural living. She lives with her 3 younger children (Sienna, Logan & Jadyn), along with their four-legged, finned and feathered friends on a homestead farm. Lucy wrote a poem to her 2 oldest children (Mason & Sienna), while deployed to Mosul, Iraq in support of Operation Iraqi Freedom 1, from April 2003 - March 2004 as a Military Police Officer in the U.S. Army.

As a birthday present, Lucy’s daughter, Sienna, who is an artist, decided to sketch pictures to coincide with the poem so that her mother could convert it into a children’s book. It was her hope that this story would be shared with other children to both give them comfort and to show them how her mother is a true hero and an inspiration.

▼▲
I'm the author/artist and I want to review A Soldier's Story - eBook.
Back
Back