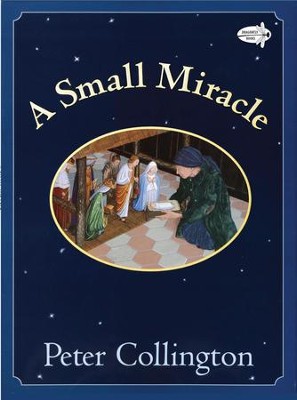 ▼▲
The wooden figures in a Christmas cr&egrave;che come to life to save a poor old woman in this truly original contemporary parable.

Told with 96 pictures by Peter Collington, the master of the wordless story, this is a Christmas treasure the entire family can enjoy.

In the Publishers Weekly 12th Annual Off-the-Cuff Awards, booksellers chose A Small Miracle as the Book We’re Sorriest to See Go Out of Print. Knopf is proud to reintroduce this picture book classic for you to enjoy Christmas after Christmas.


From the Hardcover edition.

▼▲
Peter Collington is the author and illustrator of several highly acclaimed books for children. The Chicago Tribune praised him as a “master of wordless picture books.”

▼▲
"This is a Christmas miracle like no other, with such richness in image and story that children will return to it again and again" (Booklist, starred review).

"Without a doubt the most original Christmas book of the year not the least because of its surprising yet, in context, fitting combination of the devout and the surreal."--The Horn Book, starred review

"The story is sweet, simple and wordless. The illustrations are intricate enough to warrant reading this one over and over."--American Bookseller

"...an upbeat story to treasure for this and many Christmases to come."--School Library Journal

“In a series of meticulously crafted panels, Collington poignantly relates the wordless story of a penniless old woman whose good turn is rewarded–she rescues the village church’s nativity scene from a vandal–when the figurines come to life and save her.”–Publishers Weekly, Starred

▼▲
I'm the author/artist and I want to review A Small Miracle.
Back