Skip to main content
SPRING CYBER EVENT STARTS NOW: And it's a really BIG deal! Up to 88% off through 5/24>
A Slender Grace
By: Rod Jellema
Stock No: WW27829 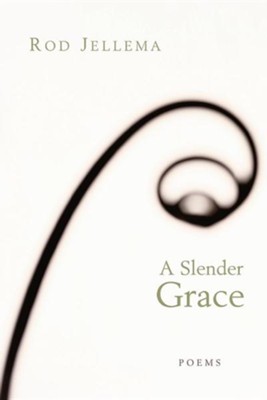 ▼▲
This book is Rod Jellema's first collection of poetry since his highly praised The Eighth Day appeared almost twenty years ago. In this volume, which consists of 67 poems, almost all of them new, Jellema confronts a culture that loves bigness with poems that notice what is slender--the thin lines, the threads by which some things hang, the narrow crevices through which divine grace offers to reconcile humans to each other and to the Creator. These beautifully crafted pieces are not "religious poems" in the usual sense. As Jellema explains, "These poems individually are not spiritual message-bearers. Still, it is inevitable that my belief in a beautiful world that is broken and divinely redeemed--though I am not preaching about it--should be evident throughout." And it is, as Jellema takes a second, deeper look at such things as green beans in all their glory, a lovesick lonely young man in a Laundromat, and his own sense of the world while snorkeling in the Red Sea.

▼▲
Through a wide swath of reflections and subjects, "A Slender Grace" alters the usual way of seeing the beautiful but broken world, creating moments in which the ordinary gives off a sheen beyond the ordinary -- moments in which faith and hope can hang by a thread, or we need to escape from bright glare into rich darkness, or moments in which we are strangers, longing for some half-sensed world to feel at home in.

▼▲
I'm the author/artist and I want to review A Slender Grace.
Back
Back