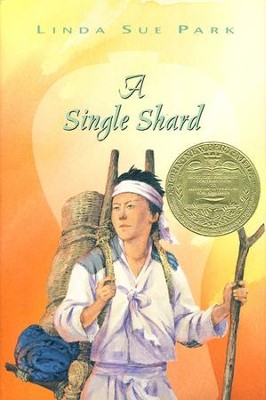 ▼▲
Tree-ear was so called after the mushroom that grew on tree trunks without benefit of parent seed. A good name for an orphan, Crane-man said.

Foraging in the fields and on rubbish heaps, and sharing food with his friend Crane-man, used to be enough to fill Tree-ear's days. But now all Tree-ear wants to do is watch master potter Min at work.

Ch'ulp'o is a potter's village famous for delicate celadon ware, and Min is the most brilliant of all the potters in Ch'ulp'o. He is also known to be short-tempered. Even so, Tree-ear is drawn irresistibly to Min's workplace. He is fascinated by the miracle of the potter's craft and dreams of making a pot of his own someday. His quest leads him down unexpected paths, with hazards and rewards beyond imagining.

This account of a creative spirit on its journey toward fulfillment is set in twelfth-century Korea, where the course of human destiny could be determined by a single celadon shard. Recommended for ages 10 to 14. The 2002 Newbery Medal winner.

The Newbery Medal-winning tale of an orphan boy whose dream of becoming a master potter leads to unforeseen adventure in ancient Korea.​

Tree-ear is an orphan boy in a 12th-century Korean village renowned for its ceramics. When he accidentally breaks a delicate piece of pottery, he volunteers to work to pay for the damage. Putting aside his own dreams, Tree-ear resolves to serve the master potter by embarking on a difficult and dangerous journey, little knowing that it will change his life forever.

"Intrigues, danger, and a strong focus on doing what is right turn a simple story into a compelling read. . . . A timeless jewel."–Kirkus Reviews, Starred Review

Linda Sue Park is the author of the Newbery Medal book A Single Shard, many other novels, several picture books, and most recently a book of poetry: Tap Dancing on the Roof: Sijo (Poems). She lives in Rochester, New York, with her family, and is now a devoted fan of the New York Mets. For more infromation visit www.lspark.com.

Park (Seesaw Girl) molds a moving tribute to perseverance and creativity in this finely etched novel set in mid-to-late 12th century Korea. . . Readers will not soon forget these characters or their sacrifices. —Publishers Weekly, Starred

"Intrigues, danger and the same strong focus on doing what is right turn a simple story into a compelling read. . . Tree-ear's story conveys a time and place far away and long ago, but with a simplicity and immediacy that is both graceful and unpretentious. A timeless jewel." —Kirkus Reviews with Pointers

Like Park's Seesaw Girl and the Kite Fighters, this book not only gives readers insight an unfamilar time and place, but it is also a great story. —School Library Journal, Starred

This quiet, but involving story draws readers into a very different time and place. Though the society has its own conventions, the hearts and minds and stomachs of the characters are not so far removed from those of people today. Readers will feel the hunger and cold that Tree-ear experiences, as well as his shame, fear, gratitude, and love. A well-crafted novel with an unusual setting. —Booklist, ALA, Starred Review

A broken piece of pottery sets events in motion as an orphan struggles to pay off his debt to a master potter. This finely crafted novel brings 12th-century Korea and these indelible characters to life. —SLJ Best Books of the Year

▼▲
I'm the author/artist and I want to review A Single Shard.
Back
Back