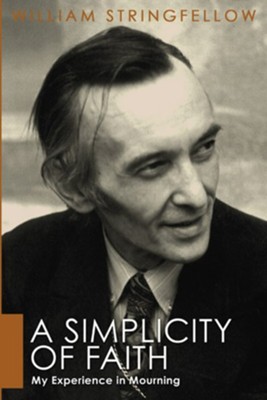 A Simplicity of Faith

▼▲
In 1980, lawyer/theologian William Stringfellow experienced the loss of his close friend and companion, poet Anthony Towne. Totally unexpected, Towne's death brought Stringfellow face-to-face with his most personal encounter with grief. These pages eloquently record his year of mourning, thus becoming both a tribute to Towne and a way of celebrating life--past and future. Five of Towne's poems appear here, brilliantly capturing the mood and tone of Stringfellow's text. Through the course of Stringfellow's dialogue with grief, he teaches us that bereavement can be a special source of inner peace. We discover that to know life in its fullest is to know and face death. 'A Simplicity of Faith' is a spiritual odyssey of rare intensity. It is a convincing argument that biography, reflected upon, becomes theology. Though in many aspects focused on death, it is a powerful statement of what it means to be totally alive. In this stirring chronicle of death within community, grief becomes the somber flippancy of the clown and the account of mourning Promethean entertainment. Through it all we learn of the Word."" --Will D. Campbell, author of 'Up to Our Steeples in Politics' It is, I believe, the best book that he has ever written . . . he penetrates so deeply into his personal experience of mourning that he is able to make universal judgments. I'm reminded . . . of the writings of Solzhenitsyn. . . . He obviously knows how to write what he thinks--and to write it in such a way that anyone can understand both his experience and his theology."" --Rt. Rev. John B. Coburn, DD, the Episcopal Diocese of Massachusetts William Stringfellow was a practicing attorney and a prominent Episcopalian layman who frequently contributed to legal and theological journals. After his graduation from Harvard Law School, he practiced some years in the East Harlem neighborhood in New York City. He was a visiting lecturer at several law schools and lectured at theological seminaries across the country. Stringfellow authored more than a dozen books, including 'A Private and Public Faith, ' 'My People is the Enemy, ' 'Count It All Joy, ' and 'Instead of Death.'

▼▲
I'm the author/artist and I want to review A Simplicity of Faith.
Back