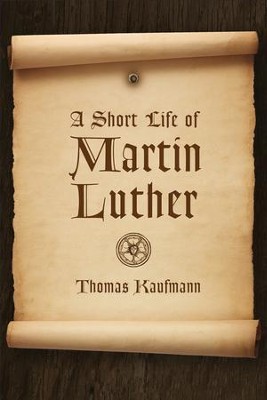 A Short Life of Martin Luther

▼▲
Kaufmann's accessible yet authoritative biography highlights the conflicting natures of the polarizing figure who began the Protestant Reformation. A solitary monk who became the first "media star" in history, Luther was often treated as either a heretic or a latter-day apostle. The author also explores the close correlation between Luther's theology and his historical context. 152 pages, softcover from Eerdmans.

Martin Luther, the Augustinian friar who set the Protestant Reformation in motion with his famous Ninety-Five Theses, was a man of extremes on many fronts. He was both hated and honored, both reviled as a heretic and lauded as a kind of second Christ. He was both a quiet, solitary reader and interpreter of the Bible and the first media-star of history, using the printing press to reach many of his contemporaries and become the most-read theologian of the sixteenth century.

Thomas Kaufmann’s concise biography highlights the two conflicting "natures" of Martin Luther, depicting Luther’s earthiness as well as his soaring theological contributions, his flaws as well as his greatness. Exploring the close correlation between Luther’s Reformation theology and his historical context, A Short Life of Martin Luther serves as an ideal introduction to the life and thought of the most important figure in the Protestant Reformation.

▼▲
Thomas Kaufmann is professor of theology at the University of G&ouml;ttingen.

▼▲
A. Trevor Sutton
—author of Being Lutheran
"Pens began to scribble whenever Martin Luther spoke. And, five hundred years later, those pens have still not stopped. Among the many Luther biographies available, however, this one is truly memorable and unique. It is simply written, yet not oversimplified; robust in scholarship, yet welcoming to many readers. Although it is a short life of Martin Luther, this book will cast a long shadow for generations."

John T. Pless
—Concordia Theological Seminary, Fort Wayne
"This concise but coherent treatment of Martin Luther portrays the Reformer as a man of extreme opposites. . . . A carefully crafted and readable narrative, Kaufmann's Short Life of Martin Luther will enlighten and challenge anyone seeking to better comprehend the person and work of Luther. The English translation of this work is a welcome addition to Reformation scholarship."

Publishers Weekly (starred review)
"Timed to coincide with the 500th anniversary of Martin Luther's 95 theses, which ushered in the Protestant Reformation, Kaufmann's short, incisive biography of Luther focuses on the theological import of his subject's life. Kaufmann conveys the core of Luther's theology, rooted in the scholar-monk's conviction of the primacy of scripture over Roman Catholic theological tradition and his unwavering belief that salvation came through grace of God alone, not through works. His sketch of Luther's life is brief, but Kaufmann does not shy away from controversial topics such as Luther's anti-Semitism and his harsh reaction to the German Peasants' War. . . . The book, written in a tone of high seriousness, is impressively clear, providing insights into the mind of a complicated individual."

▼▲
I'm the author/artist and I want to review A Short Life of Martin Luther.
Back
×
Back
×