Skip to main content
A Short Book about Paul
By: Paul Barnett
Stock No: WW665554 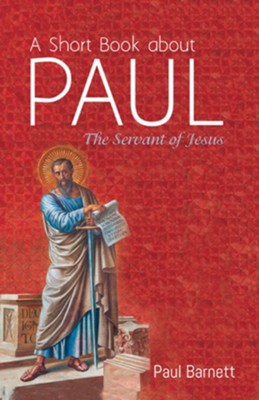 A Short Book about Paul

▼▲
Most books about Paul the apostle are long and very detailed, and for many a potential reader a daunting prospect. A Short Book about Paul is deliberately brief, but its brevity is not at the cost of accuracy. We trace the main contours of Paul's life, which turn on the hinge of the singular event outside Damascus in c. AD 34. From that time the leading persecutor of the disciples became the dedicated preacher of the message about Jesus. This short book shares with many the opinion that Paul remains the most influential voice from Greco-Roman antiquity apart, that is, from the Lord whose servant he was. At the same time, many critics have found fault with him, especially from the time of the Enlightenment. Paul's achievements were considerable. Between AD 47-56 he established a network of congregations in five Roman provinces--Syria-Cilicia, Galatia, Macedonia, Achaia, and Asia. His thirteen surviving letters are witnesses to his dedicated pastoral care of these tiny, far-flung gatherings. Not to be missed was his remarkable skill in recruiting a small army of loyal coworkers like Timothy, Luke, and Titus. The result of Paul's decade-long journeys in the provinces of Anatolia and Greece was the planting of the seeds of Christianity that would develop into the official religion of the eastern Roman Empire, based in Constantinople. ""In relatively small compass, this book succeeds not only as a basic introduction to Paul and his thought, but also as a corrective to common misunderstandings of the apostle, and as an appreciation of his ongoing significance for today's world. By setting Paul solidly in his historical context, Barnett's book will promote not only more effective exegesis of Paul's letters, but also enable readers to see how the Bible finds its unity in salvation history, and its climax in the sending of God's Son."" --Donald Hagner, George Eldon Ladd Professor Emeritus of New Testament, Fuller Theological Seminary ""This is now the best, brief, English-language book on the apostle Paul. It is equally attentive to history and theology. It owns up to objections to Paul and then forthrightly answers them. It never loses sight of the fact that Paul pointed to Jesus Christ and not himself. It traces Paul's still-important legacy. Readers both novice and advanced will profit from this careful exploration of the main contours of Paul's life, teaching, and testimony to Jesus."" --Robert W. Yarbrough, Professor of New Testament, Covenant Theological Seminary Paul Barnett is visiting professor at Regent College, Vancouver; Lecturer Emeritus at Moore College, Sydney; and Honorary Fellow in Ancient History at Macquarie University.

▼▲
I'm the author/artist and I want to review A Short Book about Paul.
Back