Skip to main content
A Separate Peace
By: John Knowles
Stock No: WW253973 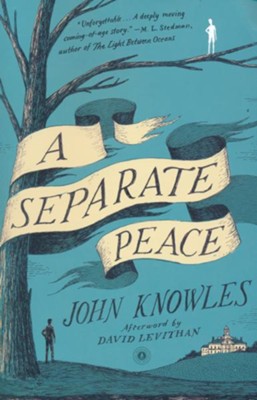 A Separate Peace is a coming-of-age novel that follows the relationship between Gene and Phineas at their New England boarding school. After a tragic accident set into motion by Gene's jealousy of Phineas' outgoing personality and athletic skill, Gene has to deal with his insecurities and guilt for Phineas' injury. As World War II begins to start, Gene grapples with his motivations and the consequences of his actions with Phineas, his own role with the war effort, and what his own calling is. 208 pages, softcover. Questions for discussion and an afterward by David Levithan included.

▼▲
Nominated as one of America’s best-loved novels by PBS’s The Great American Read.

An American classic and great bestseller for over thirty years, A Separate Peace is timeless in its description of adolescence during a period when the entire country was losing its innocence to World War II.

▼▲
John Knowles (1926–2001) was a graduate of Phillips Exeter Academy and Yale University, as well as a recipient of the William Faulkner Award and the Rosenthal Award of the National Institute of Arts and Letters. His books include Separate Peace, Peace Breaks Out, and The Paragon.

▼▲
Aubrey Menen I think it is the best-written, best-designed, and most moving novel I have read in many years. Beginning with a tiny incident among ordinary boys, it ends by being as deep and as big as evil itself.
National Review A masterpiece.
The Observer A model of restraint, deeply felt and beautifully written.
Warren Miller Mr. Knowles has something to say about youth and war that few contemporary novelists have attempted to say and none has said better.

▼▲
I'm the author/artist and I want to review A Separate Peace.
Back
Back