Skip to main content
A Secular Age
By: Charles Taylor
Stock No: WW026766 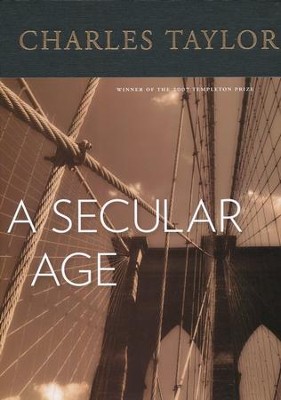 ▼▲
A lifetime of deep immersion in political philosophy, theory, and science has informed this comprehensive tour of Western cultural and its slow move towards secularization. Charles Taylor contrasts an immanent worldview with a transcendent one, and develops this alongside his idea of fullness, an activity or condition of personal richness where each person finds himself complete. He discusses what 'secular' means to individuals caught in the system of a secular society, and how to survive in that society.
Part 1 of A Secular Age delves into religious belief, the disciplines inherent in those beliefs, and the resultant idealism they engender. Part 2 defines the turning point, encompassing providential deism and changes in the impersonal order (a propensity towards anthropocentricism and a change in the understanding of God). Part 3 illuminates the crisis in civilization attendant to these changes, including radical redefinitions of the goals of society, counter-cultural artforms, and the development of new unbelieving variants of the vertical ideal of order such as fascism and radical nationalism.
Part 4 traces the secularizing force from a 16th century religious belief interwoven with social life, through the 19th century mechanistic materialism that questioned all religious systems, to the 21st century's near-total erosion of the enchanted cosmos system from five centuries previous. Without society's superstructure, strength and stability, Taylor argues, secularization has the effect of reducing its once-characteristic religious influence to simply one of many optional accessories. Part 5 gives an imperative for both humanistic and faith-based belief (while clarifying the obstructive nature of modern Western culture) by finding sources of morality to facilitate possession of particulars common to both perspectives. He strongly stresses the need to make every attempt to avoid the almost inevitable inclination to violence.
Taylor concludes A Secular Age by addressing the rise in modern culture of a predominant concept of a closed immanent order and what he feels is the culmination of the matter, the impetus to complete the reforming of culture. Although steeped in the longstanding traditions of political philosophy, Taylor is not bound by them, coming to some conclusions contrary to mainstream secularization theorists, but reinforcing them with deductions that could only have come from one of the finest critical minds of our times.

▼▲
Taylor takes up the question of what happens when a society in which it is virtually impossible not to believe in God becomes one in which faith, even for the staunchest believer, is only one human possibility among others.

▼▲
In his characteristically erudite yet engaging fashion, Taylor, winner of the 2007 Templeton Prize, takes up where he left off in his magnificentSources of the Self (1989) as he brilliantly traces the emergence of secularity and the processes of secularization in the modern age. Challenging the idea that the secular takes hold in a world where religion is experienced as a loss or where religions are subtracted from the culture, Taylor discovers the secular emerging in the midst of the religious. The Protestant Reformation, with its emphasis on breaking down the invidious political structures of the Catholic Church, provides the starting point down the road to the secular age. Taylor sweeps grandly and magisterially through the 18th and 19th centuries as he recreates the history of secularism and its parallel challenges to religion. He concludes that a focus on the religious has never been lost in Western culture, but that it is one among many stories striving for acceptance. Taylor's examination of the rise of unbelief in the 19th century is alone worth the price of the book and offers an essential reminder that the Victorian age, more than the Enlightenment, dominates our present view of the meanings of secularity. Taylor's inspired combination of philosophy and history sparkles in this must-read virtuoso performance.(Sept.) Copyright 2007 Reed Business Information.

▼▲
I'm the author/artist and I want to review A Secular Age.
Back
Back