Skip to main content
SPRING CYBER EVENT STARTS NOW: And it's a really BIG deal! Up to 88% off through 5/24>
A Secret Life in the Secret Kingdom
By: Jean Chamblee
Stock No: WW818834 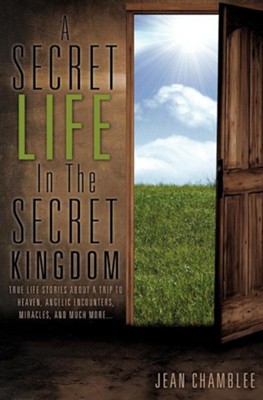 A Secret Life in the Secret Kingdom

▼▲
"Now I fully believed that we have angels working with us. I had just never seen one with wings on the earth...until that day..."When Jean Chamblee was a teenager she was caught up out of her body and taken for a small glimpse of heaven. Though she did not fully understand what had transpired, it began a lifetime of experiencing the supernatural workings of God.Encased in this book are two decades of incredible true stories from her life as she walked in a close and personal relationship with God. From visions of Jesus, angelic encounters, and miracles, Jean has walked with the Lord in a spectacular way. For most of her life, she has kept many of these stories secret. Now the time has come for her to share them with the world.Jean Chamblee is a native of North Carolina. She has been walking with the Lord for 30 years to date. She graduated from a Bible school in Oklahoma in 1986. Her ministry experience includes several overseas missions, helping pioneer three churches in California, leading worship, teaching Sunday school, travel teaching and singing.Jean has recorded and released three CD's of original music and had several of her songs aired in Southern California, England, and Russia. She continues to travel, teach, and sing and has a special love and burden in her heart for the upcoming generation.

▼▲
I'm the author/artist and I want to review A Secret Life in the Secret Kingdom.
Back