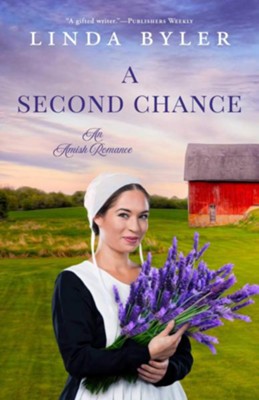 ▼▲
Edna Miller waited years for Emery Hoschtettler to ask her out. She'd passed up many other suitors who didn't make her feel as if she were walking on air or desperate to be near them. Finally, she thinks, God is rewarding her patience---or is he? Is Emery really the man Edna thought he was? 336 pages, softcover from Good Books.

▼▲
How long will Edna have to wait for the love of her life? Will God reward her patience? From Linda Byler, bestselling author of Amish Romances, comes a new story with "multifaceted characters who deal with real-life issues"—Publishers Weekly

"Short, dark-haired and dark-eyed, soft and round and capable, Edna was crackling with a zest for life. There was no job too mountainous for her. She had no husband or children, and had never had a date in her life."

For years, Edna Miller has found herself drawn to Emery Hoschtettler with an attraction she can explain no better than she can put a stop to it. Other suitors come and go, but none make her feel the way she feels around Emery—that incredible floating feeling, as if she was walking on air, mixed with a painful desperation to be ever nearer to him. Despite the fact that Emery seldom seems to pay her much attention, she decides it would be unfair to marry anyone else when her heart longs only for him. He hasn’t seriously dated anyone else either, so perhaps he’s just waiting for the right time to ask her . . .

By the time Edna is twenty-nine, most of her family and friends have given up hope of her ever marrying. Why she didn’t give that nice man Jonathan more of a chance was beyond them. Sure, he had a bit of a limp from the tractor accident, but he was kind as could be, not to mention wealthy. Was she so vain that she could only judge based on outward appearances? Well then, she could go ahead and be a maud for the rest of her life, cooking and cleaning for other families.

When Emery finally asks Edna out, she can hardly contain her joy. Everything is coming together—God is rewarding her patience! Her family will understand why she could never settle for anyone else.

But what if Emery isn’t the man Edna was so sure he was? Is there something he’s hiding, or is Edna simply unable to accept true love after so many years of waiting? Would God really lead her all this way, just to leave her alone again?

▼▲
Linda Byler grew up Amish and is an active member of the Amish church today. She is the author of five bestselling fiction series, all set in the Amish world: Hester's Hunt for Home, Lancaster Burning, Sadie’s Montana, Lizzie Searches for Love, and The Dakota Series. In addition, Byler authored The Healing and has written several Christmas romances: A Horse for Elsie, A Dog for Christmas, The Little Amish Matchmaker, The Christmas Visitor, Mary’s Christmas Good-Bye, and Becky Meets Her Match. Linda writes all her novels by hand in a notebook and is also well known within the Amish community as a columnist for a weekly Amish newspaper.

▼▲
"Byler creates multifaceted characters who deal with real-life issues, showcasing how plain life is not always simple. Fans of Amish romance will enjoy this tale of an independent woman waiting for her chance at love." —Publisher's Weekly

▼▲
I'm the author/artist and I want to review A Second Chance.
Back