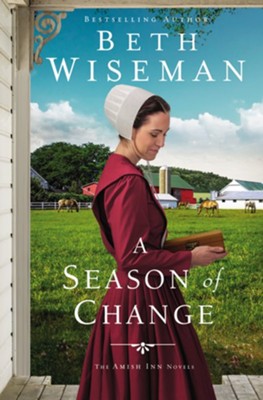 A Season of Change

Finding peace means letting go of the past—and embracing the change that is to come.

Sisters Esther and Lizzie have a new employee, Rose Petersheim, to help them tend to The Peony Inn. But their old matchmaking ways have stayed the same. The sisters focus their efforts on the lovely twenty-five-year-old Rose. Though Rose is witty and outspoken, her nervous chattering makes her the best match for someone calm and good at listening. Someone like Benjamin—the handsome handyman who recently moved to town.

But when Esther receives an anonymous love letter and flowers, Rose’s love life is no longer the only one capturing the sisters’ attention. As they sleuth around searching for Esther’s secret admirer, they uncover that their grumpy renter, Gus, has a secret of his own that could bring about a difficult change in all their lives. And their continued meddling in Rose’s affairs reveals she, too, is hiding something—an old wound that could threaten her future happiness.

As Rose, Lizzie, Esther, and Gus struggle to release the weight of their pasts, they discover that although people are complicated, love doesn’t need to be.

This charming third installment of the Amish Inn series from bestselling author Beth Wiseman is a picture of loss and healing in which forgiveness will prove to be the greatest act of love.

Bestselling and award-winning author Beth Wiseman has sold over two million books. She is the recipient of the coveted Holt Medallion, a two-time Carol Award winner, and has won the Inspirational Reader’s Choice Award three times. Her books have been on various bestseller lists, including CBD, CBA, ECPA, and Publishers Weekly. Beth and her husband are empty nesters enjoying country life in south central Texas. Visit her online at BethWiseman.com; Facebook: @AuthorBethWiseman; Twitter: @BethWiseman; Instagram: @bethwisemanauthor.

▼▲
I'm the author/artist and I want to review A Season of Change.
Back
Back