We are OPEN and SHIPPING - click here for shipping estimates
PRE-SUMMER CYBER SALE EXTENDED thru 6/1 ~ Over 2,500 items up to 90% off
A Season of Angels, Cape Light Series #13
By: Thomas Kinkade, Katherine Spencer 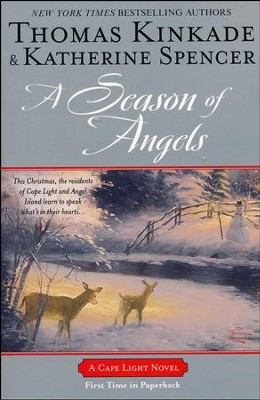 ▼▲
Adele Morgan has made a few mistakes in her life. After a serious medical scare, she realizes that her greatest regret is that she sat idly by while a petty dispute tore her family apart. She has returned to Cape Light determined to mend the relationship between her feuding sons and bring everyone together for the holidays; a daunting challenge even for a mother's brave and loving heart.

▼▲
When hearts are open, love takes hold this Christmas in Cape Light.

Adele Morgan has made mistakes in her life. After a serious medical scare, she realizes her greatest regret is that she sat idly by while a petty dispute tore her family apart. She has returned to Cape Light determined to mend broken relations and bring everyone together for the holidays. But Adele’s arrival elicits little delight. Neither Molly Willoughby nor Sam Morgan has time for their grandmother’s plan to reconcile. It will take a miracle to unite Adele’s family. Luckily for Adele, miracles can happen at the Inn at Angel Island.

Meanwhile, there’s another visitor, a skeptic determined to debunk Angel Island’s legend. Grad student Jonathan Butler plans to prove the angel lore is nonsense and leave with a grand “bah humbug!” Stuck on the island for Christmas, he spends his time doing research in the Historical Society where he meets local undergrad Tess Wyler. It’s only a matter of time before he too falls under the island’s spell and realizes that the proof of Angel Island and Cape Light’s magic lies within.

▼▲
Thomas Kinkade emphasized simple pleasures and inspirational messages through his art. Thom believed that both the ability and the inspiration to create his paintings had been given to him as a gift. His goal as an artist was to touch people of all faiths and to bring peace and joy into their lives through the images he created. Kinkade was the creator of both the Cape Light and the Angels Island series.

Katherine Spencer was a fiction editor before turning to a full-time career as a writer. The author of more than thirty books, she also writes the Black Sheep Knitting Mysteries under her real name, Anne Canadeo. She lives with her husband and daughter in a small village on the Long Island Sound. Outside of her office, she’s active in many community projects, including aiding the homeless, preparing food for those in need, and participating in a literacy outreach program that promotes reading and provides free books.