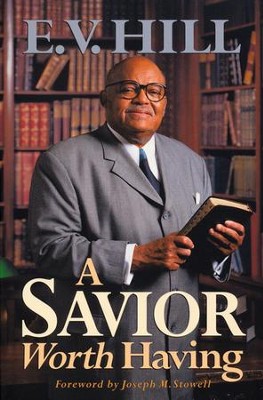 A Savior Worth Having

▼▲
A Savior Worth Having is a collection of sermons that E.V. Hill delivered over the years that all center on our wonderful Savior, Jesus Christ. In an easy-to-read and easy-to-understand way, E.V. Hill paints an amazing picture of our glorious Lord.

If you don't know Him, you should, and you can. Just read on.

A Savior Worth Having is a collection of sermons that E.V. Hill delivered over the years that all center on our wonderful Savior, Jesus Christ.  In an easy-to-read and easy-to-understand way, E.V. Hill paints an amazing picture of our glorious Lord.

▼▲
E.V. HILL (1933 - 2003), author of A Savior Worth Having and Victory in Jesus, pastored the Mount Zion Missionary Baptist Church, and was a preacher and teacher for conventions, universities, seminaries, Bible conferences, local churches and city-wide revivals throughout the world. Several United States presidents sought his counsel. He was honored by Time magazine as one of the seven most outstanding preachers of the United States. Dr. Hill also served as a member of the board for directors of the Billy Graham Association, America for Jesus, and the Board of Reference of African Enterprise.

JOSEPH M. STOWELL currently serves as the president of Cornerstone University in Grand Rapids, Michigan. He is a graduate of Cedarville University and Dallas Theological Seminary and was honored with a doctor of divinity degree from The Master's College in 1987. From 1987 to 2005, Joe served as the president of Chicago¿s Moody Bible Institute, joining the staff of the suburban Chicago Harvest Bible Chapel in 2005. An internationally recognized conference speaker, Joe has written numerous books including the award winning The Trouble with Jesus, Strength for the Journey, and The Weight of Your Words. Joe and his wife, Martie, are the parents of three adult children and have ten grandchildren. They currently live in Ada, Michigan.

▼▲
I'm the author/artist and I want to review A Savior Worth Having.
Back
Back