Skip to main content
A Rope of Sand - eBook
By: Michael Kammen
Stock No: WW33135EB 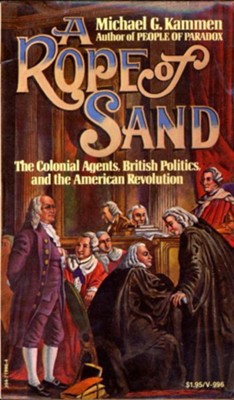 A Rope of Sand - eBook

▼▲
During the twenty years before the American Revolution, thirty-seven men acted as paid agent or lobbyists for the American colonies in England. The most famous among them were Benjamin Franklin, who represented four different colonies and served for seventeen years as agenet for Pennsylvania, and Edmund Burke, who accepted the position to further his own career. Yet the other thirty-five were also a colorful and heterogenous group. This detailed study, by a Pulitzer-prize-winning historian, of their activities and of the gradual breakdown of communications between the colonies and the mother country, until the link between the two become only "a rope of sand," is, in the words of the Richmond News Leader, "a new and invigorating approach to the American fight for independence."

"A challenging book about an important historical institution."
- The Historian

"A substantial contribution to our understanding of Anglo-American history during the eighteenth century."
- The New England Quarterly

"Both in concept and execution, A Rope of Sand is impressive."
- The Journal of American History

▼▲
MICHAEL KAMMEN, the Newton C. Farr Professor of American History and Culture at Cornell University, was a president of the Organization of American Historians. He was the author or editor of numerous works, including People of Paradox: An Inquiry Concerning the Origins of American Civilization, which won the Pulitzer Prize for History, and A Machine That Would Go of Itself: The Constitution in American Culture, awarded the Francis Parkman Prize and the Henry Adams Prize. Kammen lectured throughout the world. He died in 2013.

▼▲
I'm the author/artist and I want to review A Rope of Sand - eBook.
Back
Back