Skip to main content
A Requiem for Hitler
By: Klaus Scholder
Stock No: WW081691 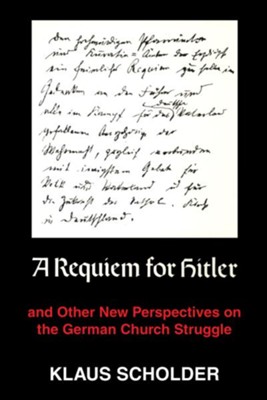 A Requiem for Hitler

▼▲
Professor Scholder's book is a major contribution to our understanding of Christianity under the Nazi regime, in some ways going beyond his definitive history of the German churches under the Third Reich. The volume paints a vivid picture of the problems of living under any kind of totalitarian regime, with a wealth of detailed evidence and insightful judgments. A few illustrations from the book: - After the news of Adolf Hitler's death, Cardinal Bertram of Breslau, the senior German prelate, drafted an order for a requiem mass to be said for Hitler throughout his churches. - Under the Hitler regime any resistance in both Protestant and Catholic churches came largely from individuals; officially the churches were interested above all in maintaining their status quo. - When Germany entered the Spanish Civil War, Hitler offered the churches support if they would join his battle against Bolshevism. Students, historians, and the general reader will be captivated by Scholder's perceptive and challenging interpretations of the churches in Western Europe prior to and during the Second World War, which still have relevance for us today. Until his death in 1985 Klaus Scholder was Professor of Modern Church History in the Evangelical Theological Faculty of the University of Tubingen, West Germany, and Vice-Chairman of the German Evangelical Church's commission for contemporary history.

▼▲
I'm the author/artist and I want to review A Requiem for Hitler.
Back