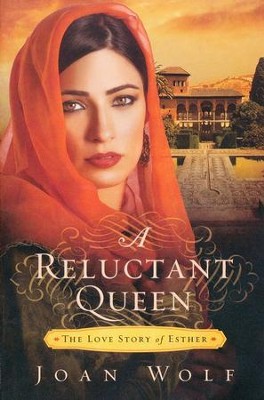 ▼▲
An inspiring re-imagining of the tale of Esther, a young Jewish woman thrust from a life of obscurity into a life of power, wealth, intrigue . . . and tender love.

View the story of Esther in an entirely new way-with all the political intrigue and tension you remember, but told as a passionate and tender love story between a young man and woman. Misunderstood by many, King Xerxes was a powerful but lonely man. Esther's beauty caught the eye of the young king, but it was her spirit that captured his heart.

You've read it as a biblical tale of courage. Experience it anew as a heart-stirring love story.

She was a simple girl faced with an impossible choice. He was a magnificent king with a lonely heart.

Their love was the divine surprise that changed the course of history.

The beloved story of Esther springs to fresh life in this inspired novel that vibrates with mystery, intrigue, and romance.

▼▲
"With romance, wonderful characterizations, historically based accounts of the ancient Jewish and Persian cultures, and an amazing ending, this excellent read will be a hard-to-put-down winner for historical romance fans." - CBA Retailers and Resources

Wolf's latest gives readers a wonderful glimpse into the life of Queen Esther. Readers will enjoy getting to know her as a woman beset with political ambition and family rivalries. While this novel doesnt completely follow the biblical story, readers will still enjoy this Cinderella tale come to life. - 4 stars, Romantic Times

▼▲
Historical fiction writer Wolf (The Road to Avalon) has turned the biblical Book of Esther, read in synagogues on the merrymaking festival of Purim, into a novel. She maintains most of the story's primary elements but rearranges them, invents a bit, and changes several attributes of the characters. The hero, Mordecai, appears as Esther's uncle rather than her cousin, as he was in the original biblical tale. More importantly, she reimagines King Ahasuerus, who was originally based on the historical Xerxes, son of Darius and grandson of Cyrus the Great, and makes him the fictional praiseworthy character. The real Xerxes was actually arbitrary and brutal. In Wolf's novel, he plays a minor role as Ahasuerus's brother. Some things don't change. The villain, Haman, who is booed and jeered when his name is mentioned in synagogue readings, is just as nasty a person in the novel as he is in the biblical story. In both, he receives his just desserts. Wolf has succeeded in tidying up the biblical account, reconstructing its people and events while preserving its essential elements and producing an attractive love story. Readers can decide for themselves which version they prefer. (June) Copyright 2011 Reed Business Information.

▼▲
She was an ordinary Jewish maiden. Her beauty made her a queen of an empire. Her courage made her a savior of her people. She was Esther, and Joan Wolf tells her story in A Reluctant Queen. Of course, Wolf has to use her imagination to flesh out the story, but she basically follows the book of Esther. However, she does make some changes.

Esther, a young Jewish maiden who lives with her Uncle Mordecai, dreams of marrying her best friend's brother. However, following a vivid and frightening dream that Mordecai has that he believes is from the Lord, the Jewish elders, including Uncle Mordecai, ask her to be their emissary to King Ahasuerus by becoming a candidate for queen. Only maidens from Ahasueruss tribe will be considered, but because Esther's father was a soldier from that tribe, Esther qualifies.

When Mordecai takes her into the harem, Esther believes that she will be rejected quickly because she is so different than the other candidates and will be allowed to return home. To her surprise, that is what interests Ahasuerus in her. After their marriage, Esther finds herself falling in love with Ahasuerus and fearful that he will discover that she is Jewish and has lied to him. The king falls in love with Esther, too.

The amount of time that the king spends with Esther makes Haman, one of his trusted advisers, jealous. He also resents Mordecai because Mordecai will not bow to him. When Ahasuerus is away, Haman arrests Mordecai and plans his death, as well as the destruction of all Jews using his power as prime minister. Only Esther's intervention prevents Mordecai's death before the king's return.

Wolf's novel is engrossing, her characters well drawn, but some of its departures from Scripture trouble me. Wolf has Esther discover that Mordecai lied to her about her Gentile grandfather. She also equates Mordecai's not bowing with provocation of Haman. Esther also sympathizes with her maid and eunuch who engage in sexual relations:

"At that, Esther's heart swelled with compassion. She held out both hands and took Luara's into a strong grip. 'Of course I am not angry. How could you think I would begrudge either of you whatever happiness you might find in this prisoners life you lead?'" (pp. 182-183).

Is this attitude consistent with a Jewish woman of that time period? This scene does not need to be in the book. It has no integral part in the plot. Is this message of excusing sexual sin because of the situation one we want to pass on to teenaged girls who might read the story?

Another inconsistency is Esther's condoning her children worshipping a false god:

"She would be the wife that Ahasuerus wanted and her children would be brought up as followers of Ahuramazda (a false god worshipped by Ahasuerus). Her duty to her people was done" (p. 315).

Wolf's story is compelling and enjoyable, but her messages trouble me as inconsistent with scripture, not because she changes time elements and history, but because she represents a man whom the Bible portrays as godly as a liar, justifies sin, and shows little concern for the eternal souls of Esther's children. Debbie W. Wilson, www.ChristianBookPreviews.com

▼▲
I'm the author/artist and I want to review A Reluctant Queen, Love Story Series #2.
Back
Back