Skip to main content
A Reluctant Bride #1
By: Kathleen Fuller
Stock No: WW033156 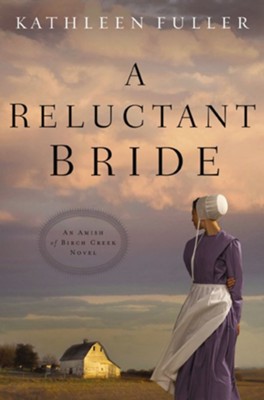 A Reluctant Bride #1, in the Amish of Birch Creek series, by Kathleen Fuller

Sadie Schrock is about to break a promise to herself.  She had never intended to marry.  But when her parents are killed and her sister injured, with bills pilling higher and higher, Sadie has to be realistic.  And humble…because the man who wants to help her now is brother to the man who’s hurt her most in this world.  But their troubles aren’t over yet.  Will they be strong enough to stay the course?

▼▲
'Fuller writes unapologetically about the darker side of Amish community life…Aden and Sadie’s life in an unwanted arranged marriage is explored with such gentleness that the reader feels the delicacy of the looks and words passed between them…readers will wait breathlessly for the emotional fulfillment of the story. Frightening, shocking, and redemptive, Fuller’s inspirational tale portrays complex characters facing real world problems and finding love where they least expected or wanted it to be.” --- starred review -- Booklist

“Fuller has an amazing capacity for creating damaged characters and giving insights into their brokenness. One of the better voices in the Amish fiction genre.” -- CBA Retailers  Resources

“This promising series debut from Fuller (“Middlefield Family” series) is edgier than most Amish novels, dealing with difficult and dark issues and featuring well-drawn characters who are tougher than the usual gentle souls found in this genre. Recommended for Amish fiction fans who might like a different flavor.” -- Library Journal

“Sadie and Aden’s love is both sweet and hard-won, and Aden’s patience is touching as he wrestles not only with Sadie’s dilemma, but his own abusive past. Birch Creek is weighed down by the Troyer family’s dark secrets, and readers will be interested to see how secondary characters’ lives unfold as the series continues.' -4-star review -- RT Book Reviews

▼▲
I'm the author/artist and I want to review A Reluctant Bride #1.
Back
Back