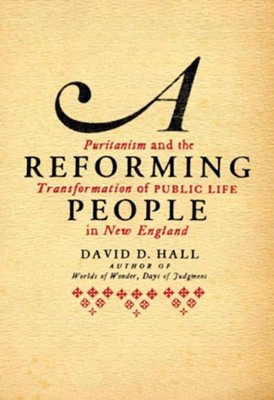 ▼▲
A revelatory account of the aspirations and accomplishments of the people who founded the New England colonies, comparing the reforms they enacted with those attempted in England during the period of the English Revolution.

Distinguished historian David D. Hall looks afresh at how the colonists set up churches, civil governments, and methods for distributing land. Bringing with them a deep fear of arbitrary, unlimited authority grounded in either church or state, these settlers based their churches on the participation of laypeople and insisted on “consent” as a premise of all civil governance. Encouraging broad participation and relying on the vigorous use of petitioning, they also transformed civil and criminal law and the workings of courts. The outcome was a civil society far less authoritarian and hierarchical than was customary in their age—indeed, a society so advanced that a few dared to describe it as “democratical.” They were well ahead of their time in doing so.

As Puritans, the colonists also hoped to exemplify a social ethics of equity, peace, and the common good. In a case study of a single town, Hall follows a minister as he encourages the townspeople to live up to these high standards in their politics. This is a book that challenges us to discard long-standing stereotypes of the Puritans as temperamentally authoritarian and their leadership as despotic. Hall demonstrates exactly the opposite. Here, we watch the colonists as they insist on aligning institutions and social practice with equity and liberty.

A stunning re-evaluation of the earliest moments of New England’s history, revealing the colonists to be the most effective and daring reformers of their day.

▼▲
David D. Hall is Bartlett Research Professor of New England Church History at Harvard Divinity School. He is the author or editor of numerous books on American religious and cultural history.

▼▲
In the popular imagination, the New England Puritans are often portrayed as dour and authoritarian individuals out to quash social liberties and enforce conformity to particular religious principles. Hall's captivating study of American Puritanism between 1630 and 1650 challenges this view and offers instead a portrait of a group of people deeply engaged in fostering vital alliances between civil government and ecclesial government. Drawing deeply on colonial records, the Harvard historian demonstrates that the Puritan colonists asked questions about who should have the vote and what kind of rulers they wanted, how the inheritance of property should be arranged, what role the civil state should play in religion, and how land should be distributed. He shows that the colonists, in contrast to their contemporaries in England, were ambitious to restore the religious practice of the earliest Christian communities, the Congregational Way. Hall's first-rate book offers a glimpse of a small slice of American religious history, challenging prevailing ideas about the nature of reform in Puritan New England. (Apr.) Copyright 2011 Reed Business Information.

▼▲
"David Hall shapes mounds of evidence into a depiction of New England unlike any we have ever seen. His Puritanism is neither authoritarian nor democratic but something of its own. Hall makes Puritanism intelligible to the 21st century." –Richard Lyman Bushman, author of The Refinement of America: Persons, Houses, Cities

"In this elegant and richly nuanced book, David Hall rescues the New England Puritans from the dark myths of repression. By recovering their probing ideas and eloquent debates, Hall reveals our original revolutionaries in search of equity, justice, and community." –Alan Taylor, author of The Civil War of 1812

"A Reforming People powerfully transforms our understanding of the role of Puritanism in the re-making of political culture and institutions in seventeenth-century New England. A model of elegance and erudition, David Hall’s thought-provoking book re-opens the testing question of the roots of modern politics in the Anglo-colonial world. It tells a compelling story that has immense resonance for our understanding of the past–but also the present." –Alexandra Walsham, author of Charitable Hatred: Tolerance and Intolerance in England 1500-1700

"In A Reforming People, David Hall reminds us of the political accomplishments of New England’s founders, their radical remaking of the nature of public life, through their commitment to self-government and their ethic of equity and mutual obligation. With an authority rooted in his unmatched mastery of the sources, Hall provides an elegant and heartfelt testament to the continuing relevance of the Puritans." –Mark Peterson, author of The City-State of Boston, 1630-1865

"Thanks to Nathaniel Hawthorne and Arthur Miller, Puritan New England is popularly identified with authoritarian theocracy. In this book, a brilliant historian of early New England takes us beyond the stereotype, and reveals how the first Puritan settlers enacted their own ’English Revolution’ in public life. Hall depicts a society that (despite its failings) prized and institutionalised accountability, participation and equity. Never before have we had such a compelling account of the New Englanders’ civic achievement." –Professor John Coffey, co-editor of The Cambridge Companion to Puritanism

▼▲
I'm the author/artist and I want to review A Reforming People - eBook.
Back
Back