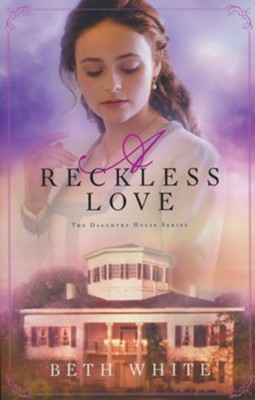 Beth White has charmed readers with her historical romance novels
set in the Deep South. In A Reckless Love, the final book in the Daughtry House
trilogy, White returns readers to Tupelo, Mississippi, one last time to offer a
captivating tale of a war-damaged lawman, a vivacious Southern belle, and an
elusive enemy set in post–Civil War America.
Aurora Daughtry loves to manage projects and people—and clearly takes after her Southern grandmother with a penchant for matchmaking. Between orchestrating successful matches for her two sisters and working on transforming the run-down family mansion, Aurora has had her hands full. But now that the Daughtry House is up and running as a luxurious and lucrative hotel resort, Aurora finds herself in need of a new project—and his name is deputy marshal Zane Sager.
Arriving at Daughtry House to collect two key witnesses to a federal judge’s murder, the lawman’s conviction that the world—and God in particular—is out to get him is clear. As determined as Zane is to put the criminal behind bars, Aurora is just as set on freeing Zane of his cynicism. But the threat of danger
increases as they get closer to the criminal—and to each other.
Masterfully weaving humor with heart, Beth White delivers an entertaining novel of two strong-willed people who might have just met their match.

Aurora takes it upon herself to disabuse the cynical lawman of his conviction that the world is out to get him. But just as she's on the verge of cracking Zane's defenses, the man he is after reminds him that no one he loves is safe. Ever.

▼▲
I'm the author/artist and I want to review A Reckless Love, #3.
Back
Back