We are OPEN and SHIPPING - click here for shipping estimates
PRE-SUMMER CYBER SALE: Shop over 2,500 items up to 90% off through 5/26 >
A Quiet Strength, A Prairie Legacy Series #3
By: Janette Oke 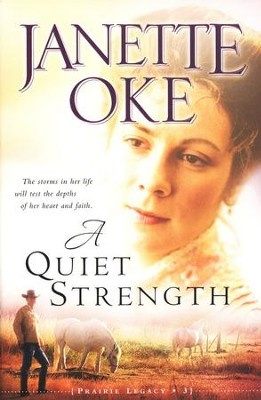 ▼▲
This historical novel set in the Canadian prairies in the early 1900s is the third book in the "A Prairie Legacy" series. It continues the story of Virginia Simpson as she marries Jonathan and struggles with him to begin and nurture a family and a successful, horse-breeding farm. Although somewhat dependent on the earlier novels, this book could also be enjoyed on its own. It would probably appeal most to young adult girls who like gentle, heartwarming tales featuring characters with a strong, traditional Christian faith.

▼▲
Virginia Simpson's courtship with an old beau is rekindled and the couple marries. The early days of marriage prove difficult as Jonathan builds their home and starts his business. Things are further complicated when the couple takes in the child of an old friend who is an alcoholic.

Janette receives fan mail from all over the world and answers each letter personally. She received the 1992 President's Award from the Evangelical Christian Publishers Association for her significant contribution to Christian fiction, the 1999 CBA Life Impact Award and has been awarded the Gold Medallion Award for fiction. Janette and her husband, Edward, have four grown children and enjoy their many grandchildren. They make their home in Canada.

Q: Discussion Guide Is there a discussion guide that goes with "A Quiet Strength" by Janette Oke? If so, how can I obtain one?

Sorry, there is no study guide for this book.

▼▲
I'm the author/artist and I want to review A Quiet Strength, A Prairie Legacy Series #3.
Back
×
Back
×